California residents across the state reported UFO sightings on New Year’s Eve. Often Chinese lanterns and fireworks are mistaken for UFOs. However, witnesses have said what they saw were not lanterns or balloons, and some local news reporters agree.

According to News 10, an ABC affiliate out of Stockton, reports came in from Sacramento to Hollywood. A couple in Auburn told News 10 they saw an egg shaped object float over their neighborhood. Terry and Hans Mauth say the object appeared to have a bright light shining upward. It drifted over the neighborhood, and then suddenly accelerated.

Sacramento resident Steve Brown also reported seeing a large glowing object. He says he watched the object for about 60 seconds before it took off at a high rate of speed. 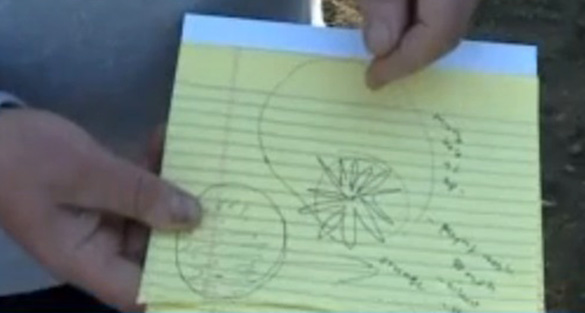 Drawing by witness of UFO over Auburn, California. (Credit: News 10)

A witness out of Stockton, Kaye Pinlac, says he saw a group of glowing objects that appeared in formation. He found a video on YouTube of similar objects filmed that night over Hollywood.

Some people have suggested what might have been seen are Chinese lanterns, which are commonly launched on New Year’s Eve. News 10 reporter George Warren said that the object in Auburn didn’t fit the description of lanterns. He said witnesses reported that it was a “single object moving unnaturally, too fast for a balloon, too slow for an airplane.”

Warren says the objects sound as though they were under intelligent control. Warren checked with local Air Force bases and he says they did not pick up anything on radar, and told him there is “of course nothing unusual happening.”

Warren also says the UFOs “were apparently not seen by any pilots or air traffic controllers.  FAA spokesman Ian Gregor said there was no unusual flight activity reported Tuesday night.”