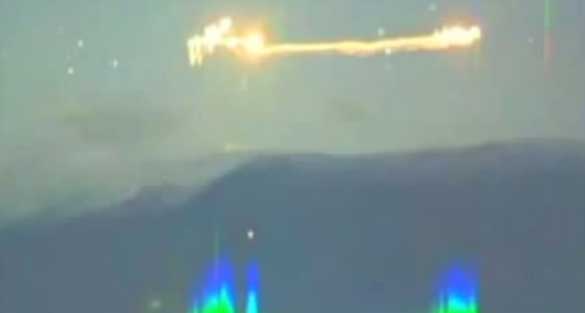 The Hessdalen valley in Norway is one of the rare places that produces UFO sightings on a continued and regular basis. A new theory presented in New Scientist gives an alternative to the idea that the mysterious lights seen there are alien spacecraft, but still suggests they may be of extraterrestrial origin.

The mysterious Hessdalen lights have been investigated by universities and scientists for decades. They of course have also caused a lot of excitement for those who investigate UFOs. J. Allen Hynek, a former consultant for the U.S. Air Force regarding the UFO phenomenon, visited the area in 1985. “Hessdalen has had the best equipment and the best period of operation and observation of the UFO-phenomenon of anyplace in the world,” Hynek said. ” Whatever it turns out to be, it is terrible important.”

Local scientists agree, and since 1984 there has been an ongoing project in the area to track and measure the lights. They say the lights began to be seen in 1981, occurring several times throughout the day. They could be seen floating in one place for hours, or zooming across the sky at over 8500 meters per second.

During the project the lights were filmed and some were even caught on radar. The report on the project describes three different types of phenomena that were observed:

1. Small and strong white or blue flashes, which could show up everywhere in the sky.

2. Yellow or yellow-white lights. These lights have very often been seen in the valley, just over the roof of the houses, or even down on the ground. They could be stationary for more than an hour, move slowly around in the valley, and sometimes show large accelerations and speeds. They could also be higher up in the sky. Mostly they moved on a north/south course.

3. Several lights together with a fixed distance from each other. Mostly it was two yellow or white lights with a red in front. Many people talked about “The object”, when they saw this type of light. These lights could move slowly around the top of the mountains. The direction of “travelling” was mostly on a north/south course.

The report says they found no explanation for the lights, but it also states their main purpose was to gather data for researchers. Although the sightings are not as common as they were in the early 80s, they are still reported often, and several have been caught on camera.

According to the Project Hessdalen website, the latest sighting was as recent as the 5th of May, 2014. The witness saw a light that was described as “white, with some red and yellow.” The light moved to the west, stopped, and then headed back to where the witness first saw the light. She ran to get her husband, but by the time they had looked outside again the light had disappeared.

Some theories have been that there is a portal in the area that allows extraterrestrials or beings from other dimensions to enter into our realm. More prosaic answers have included ball lightening. However, the latest theory has to do with the geology of the Hessdalen valley.

This theory is present in a new story by New Scientist. You have to subscribe to New Scientist to read the story, but the website Gizmodo  summed up the theory:

The unique geology of the valley could be responsible for this plasma. The valley is formed by rocks on one side rich in copper and the other rich in iron and zinc—not unlike the cathode and anode of a battery. Sulfuric acid, leached from the abandoned sulfur mine at the bottom of the valley, could then turn the river into the weak acid of an electrolyte.

However, the theory says the initial charge for the plasma may still be extraterrestrial. The Hessdalen lights seem to be more frequent during the Northern Lights when solar winds ionize the earth’s atmosphere. They could also be the charge that causes the balls of plasma to light up over the valley.

This latest theory is just that, another theory. More work would need to be done to prove this theory. Meanwhile, the lights continue to be seen by locals and visitors who come to experience the phenomenon. The Project Hessdalen website documents dozens of sightings in the area, including many fascinating pictures and videos. They also have installed webcams that can be monitored 24 hours day. Go take a look for yourself and weigh in on the debate. What do you think could be the origin of the mysterious lights of the Hessdalen valley?