Designs for a telescope that will search for extraterrestrial life have been approved.

New telescope to search for extraterrestrials 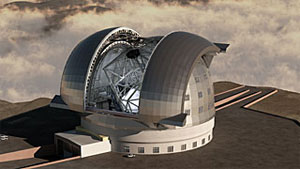 Designs for a telescope that will search for extraterrestrial life have been approved.

Researchers from Oxford and Durham Universities designed the European Extremely Large Telescope (E-ELT), which will reportedly be the largest instrument of its kind ever built. According to the Telegraph, “The E-ELT will be sensitive enough to take images of previously unseen objects, such as cold stars and more planets, and learn more about their atmosphere, what they are made of and whether they could support life.”

The European Extremely Large Telescope would operate under the European Southern Observatory (ESO) at a site in Chile. The decision of whether or not to begin construction on the E-ELT will be decided on by the ESO by the end of this year.

If approval is given to construct the E-ELT, it will be tens of times more sensitive than any other visible light-sensing telescope on Earth.