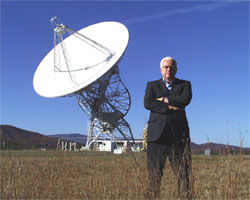 Astronomers in Australia, Japan, Korea, Italy, the Netherlands, France, Argentina and the United States launched a new coordinated series of observations earlier this month of several nearby stars in their search for intelligent extraterrestrial life.

The astronomers are aiming their radio telescopes towards two of the stars that were part of the world’s first search for extraterrestrial life 50 years ago. The first search, known as Project Ozma (named after Princess Ozma, a character in L. Frank Baum’s series of books about the Land of Oz) was conducted in the 1960s by astronomer and SETI (Search for Extraterrestrial Intelligence) pioneer Frank Drake. The latest search is called Project Dorothy, named after the heroine in L. Frank Baum’s book The Wonderful Wizard of Oz.

In a recent SETI announcement, Drake said, “”It is thrilling for me to witness the beginnings of Project Dorothy, the continuation of my search of 50 years ago.”

While the past 50 years have not returned the results for which SETI was hoping, they are optimistic with Project Dorothy, building off of lessons learned from previous searches. The observations for Project Dorothy began on November 5th, and will continue throughout the month.