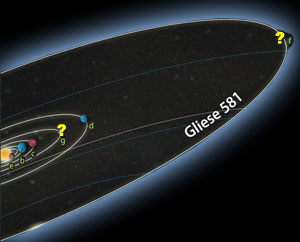 At the IAU (International Astronomical Union) meeting in Torino, Italy this week, Francesco Pepe, an astronomer from the Geneva Observatory, said that his team has been unable to confirm the existence of Gliese 581g. In 2009, the Geneva team announced the discovery of planet “e” in the Gliese 581 solar system, and since then, have also been able to easily detect the three previously announced planets: b, c, and d. The team has been unable to locate the “g” planet, and Pepe even told Astrobiology Magazine that his team has not been able to confirm the existence of the “f” planet either.

Last month’s discovery of Gliese 581g was in a paper published by astronomers from the Lick-Carnegie Exoplanet Survey in Astrophysical Journal. This same paper included the announcement of the discovery of the “f” planet. The lead author of this paper, Steven Vogt, has stated, “The fact that we were able to detect this planet so quickly and so nearby tells us that planets like this must be really common.”

The differing opinions have created doubt about the existence of Gliese 581g, and there is a possibility that the media is responsible for jumping to conclusions. Ray Jayawardhana, a University of Toronto astronomer, feels that “the detection was less than comfortably secure, even in the original Vogt et al. paper – the paper was carefully worded, as opposed to what was in some media reports.”

The Gliese 581 solar system is 20 light years away from Earth in the constellation Libra, and may or may not contain six planets.