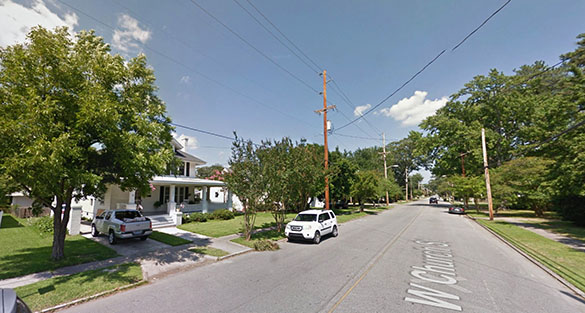 A North Carolina witness at Elizabeth City reported watching a triangle UFO hover under 500 feet over his vehicle, according to testimony in Case 81565 from the Mutual UFO Network (MUFON) witness reporting database.

The reporting witness was a passenger in his mother’s vehicle on January 11, 2017, as they were driving into town for a birthday dinner. 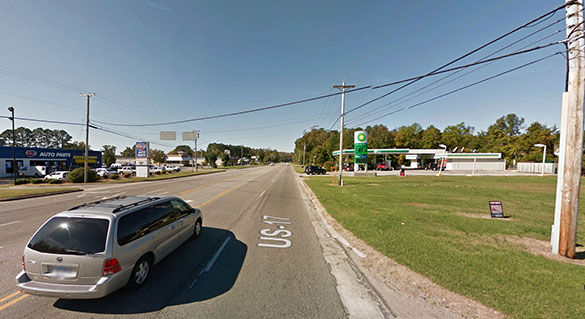 The witness was first drawn to the craft because it had unusually bright lights. Pictured: Elizabeth City, NC. (Credit: Google)

“On our way to town, I happen to notice what I thought at first was maybe a helicopter or aircraft,” the witness stated. “But it had unusually bright, white lights, with what appeared to be red/green flashing lights, kind of like a normal aircraft might have. Didn’t think too much of it at the time, but kept kind of looking towards it, as it moved slowly.”

As their vehicle moved along, the witness kept watch of the unusual object.

“It arrived at the edge of town, just about the time we did, and was hovering low, over trees and houses. About the time we turned to head towards town, its flight path was heading right for us, so I was like, okay, I’ll see what it was for sure now, cause it’s about to be right over our heads.” 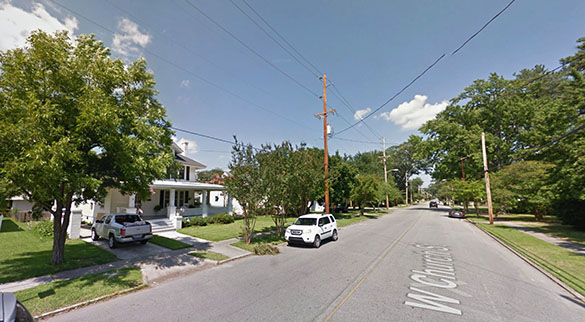 The object eventually moved toward the witness and hovered over his vehicle. Pictured: Elizabeth City, NC. (Credit: Google)

“So I look out the window as it slowly hovered overhead and was dumbfounded by what I saw. It was a triangular-shaped craft, unlike anything I have ever seen before. Three bright, white lights at the corners of the craft. Red lights towards the center. And orange lighting in various places. It seemed to have orange lit, engine-like vents towards the back end of the craft. It seemed to be dark gray in color, but the whole thing had this translucent blueish aura about it.”

The witness described his encounter as brief, but life changing.

“I’ve never seen anything with this level of tech. You could just feel how powerful this thing was. I’m a bit of sci fi fan, and have kind of somewhat believe the possibility of stuff like this existing. The crazy part is, the thing was still in the area on our way home, an hour or so later. Though it didn’t come close to us again. But seriously, it just made everything I’ve ever seen, including fantasy, just pale in comparison. I’ve actually been kind of scared to drive or even go out at night since seeing it. It’s really kind of shaken me up. My mother was driving, so she never got a close look at it like I did, unfortunately. And no pictures either. I honestly was so amazed and shocked, I didn’t even think to try.” 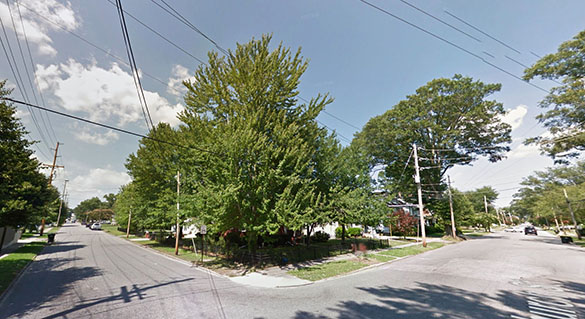 An hour after the original event, the witness was still able to see the object, but further away. Pictured: Elizabeth City, NC. (Credit: Google)

Elizabeth City is a city in Pasquotank County, North Carolina, population 18,047. North Carolina MUFON Field Investigator Sanford Davis investigated this case and closed it as an Unknown. Please remember that most UFO sightings can be explained as something natural or man-made. The above quotes were edited for clarity. Please report UFO activity to MUFON.com.