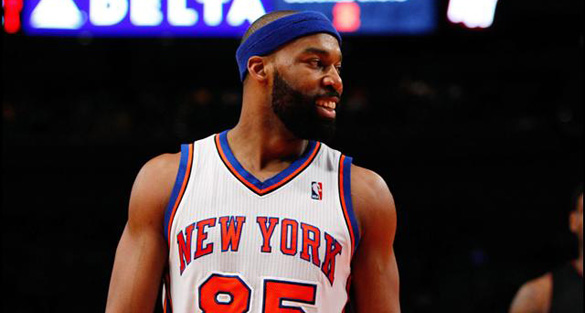 NBA All-Star Baron Davis says he was abducted by aliens

Baron Davis, a two-time NBA All-Star who most recently played for the Knicks, says he was abducted by aliens two weeks ago while driving from Las Vegas to LA.

In an interview with The Champs comedy podcast with hosts Neal Brennan and Moshe Kasher, the conversation somehow got around to aliens. Davis nonchalantly said he had just recently been abducted by aliens, shocking the hosts. They assumed he had been joking, but as Davis told his story they began to wonder. They asked if he was serious, to which Davis replied, “Yeah, hell yeah, dude.”

I will use direct quotes sparingly, since there was a lot of foul language in the story. For those who are not offended by this, you can listen to the clip below. Anyway, the story goes like this. While driving from Las Vegas to LA, Davis saw a bright light headed his way. It was a windy road, and he was concerned because he thought it was a truck and there would be traffic. He said the light was red, then white and then really bright.

Davis says the next thing he knew he was in a steel “thing” with some half human looking “ugly” aliens. He says they poked his nose and looked into his eyes. The whole time his hands were tied. He then suddenly found himself back in his car at the Montebello exit. He didn’t know how he had gotten there. He said he pulled off the road and went to the In and Out and had a couple of burgers as he tried to figure out what happened. He was so shocked that he had the shakes.

He said he didn’t think it was necessarily an abduction because ever since he has been sharper and has been able to retain information better. He speculated that maybe it was even the Illuminati.

Listen to a clip of the interview here (WARNING: GRAPHIC LANGUAGE):

UPDATE: It was a joke!

Although he seemingly convinced the hosts of The Champs, and news outlets around the world, that he was serious about his claims, Davis tweeted afterwards that his alien claims were just a joke.

Alien story was a Joke!! Get over it people. Nothing more than that.. #geeeeez