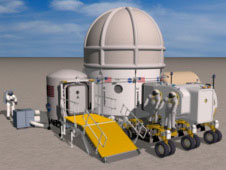 Depiction of the HDU (credit: NASA)

This new habitat is yet another example of how NASA continues to make advancements in their efforts to explore the galaxy and search for extraterrestrial life.

The Habitat Demonstration Unit (HDU) was tested in the Arizona desert, which provided a somewhat Mars-like atmosphere. According to MIT’s Technology Review, “The current prototype housing unit has a hard cylindrical shell, contains four rooms, two outside additions for dust mitigation and hygiene, and an inflatable component that adds a second level for sleeping and relaxing.”

The video below provides a virtual tour of the unit.

Technology Review explains that the unit could be adapted for use on the moon, mars, an asteroid, or even used as a free-flying space habitat.

The results gathered from the unit’s testing were presented this week at the American Institute for Aeronautics and Astronautics (AIAA) Space 2011 conference in Long Beach, California.