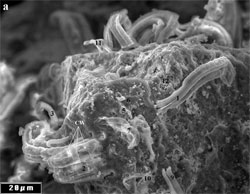 Meteorite under a scanning electron microscope (credit: Hoover/Journal of Cosmology)

A NASA scientist believes he has evidence that supports the notion of life existing outside our planet. In the March 2011 Journal of Cosmology, Richard Hoover explains that rare meteorites on Earth contain what appear to be small fossils of extraterrestrial life. Hoover drew this conclusion based on the lack of nitrogen found in the remains—something necessary for life on Earth. As the Huffington Post points out, Hoover’s claims support the idea known as panspermia, which suggests space rocks spread life to different planets.

While Hoover’s findings have yet to be validated, 100 scientists have been invited to review and critique his research.