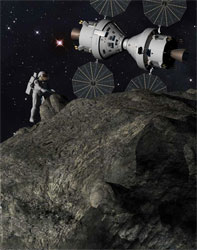 Forget the moon. At least that is NASA’s thought, as they shift their sights from the moon to an asteroid. President Obama announced the focus shift last year during a speech at NASA’s Kennedy Space Center, where he stated, “By 2025 we expect new spacecraft designed for long journeys to allow us to begin the first-ever crew missions beyond the moon into deep space . . . So we’ll start by sending astronauts to an asteroid for the first time in history. By the mid-2030s, I believe we can send humans to orbit Mars and return them safely to earth, and a landing on Mars will follow.”

But as Space.com points out, the task of picking out the right asteroid is presently “the most urgent task for any space rock mission.” Planetary scientist and former NASA astronaut Tom Jones told Space.com, “Right now we only have a few targets in our catalog. We need a lot more to provide us with maximum mission flexibility.”

NASA is working hard to meet its goal of sending astronauts on an asteroid-bound mission by 2025.