NASA has partnered with another company to continue space flights. 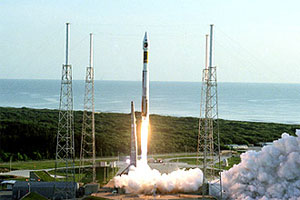 Space shuttle Atlantis departed from the International Space Station today. And its returns to Earth on Thursday morning will mark the end of NASA’s space shuttle program. But NASA isn’t wasting any time. The organization is already working on solutions to launch humans into space again as soon as possible.

According to the Huffington Post, a partnership was announced on Monday between NASA and Colorado-based United Launch Alliance (ULA). The two will share data, as NASA evaluates ULA’s Atlas V rocket to determine whether or not the rocket can safely launch a manned craft into space.

The Denver Post reports that, “If human certification is determined, an Atlas V-powered private spacecraft could be launched ‘by mid-decade,'” according to Ed Mango, program manager of NASA’s commercial crew development program.

NASA already has a contract with another rocket company, SpaceX. NASA is going full-steam-ahead, working with several companies to ensure the exploration of the universe moves forward. But as the Denver Post points out, “ULA is the first rocket company to join NASA in studying the capabilities and limitations of its vehicles.”