Home / Featured / NASA finds ‘puzzling structures’ on surface of giant asteroid
According to NASA, strange structures were detected on the large asteroid as it passed Earth. 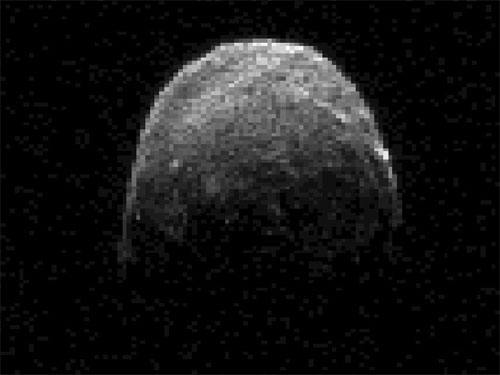 An aircraft-carrier-sized asteroid known as Asteroid 2005 YU55 recently passed between the moon and Earth, making its closest pass to our planet in 200 years. According to NASA, strange structures were detected on the large asteroid as it passed Earth at an impressive 30,000mph.

According to the BBC, two radio telescopes–the Goldstone Observatory in California and the Arecibo Observatory in Puerto Rico–recorded radio echoes off the asteroid “to understand better what it is made of and how it is shaped.” Scientists at the Goldstone Observatory assembled a short video of the asteroid using images generated from data acquired with the 230-foot-wide Deep Space Network antenna on November 7, 2011, between 11:24 a.m. and 1:35 p.m. PST. The images used to create this video are reportedly the highest resolution images ever made by radar of a near-Earth object.

NASA reports that the principal investigator for Asteroid 2005 YU55 observations, radar astronomer Lance Benner from NASA’s Jet Propulsion Laboratory in Pasadena, California, stated about the video, “The animation reveals a number of puzzling structures on the surface that we don’t yet understand.” He further stated, “To date, we’ve seen less than one half of the surface, so we expect more surprises.”

So are these structures evidence of an extraterrestrial civilization? Some think so, while others think the usage of the term “structures” in this instance simply refers to anomalies on the asteroid’s surface. In either case, these “structures” have scientists puzzled, and their identity is unknown.

I don’t see any structures. Do you? Watch the Goldstone Observatory video below: