The conclusion of NASA’s space shuttle program earlier this year led some to believe that United States space exploration was dead. But a publication released today by NASA illustrates a very exciting roadmap of exploration plans for the next twenty-five years.

The publication, titled The Global Exploration Roadmap, was created by 14 space agencies including Roscosmos (Russia), UKSA (the UK), CNSA (China) and NASA, collectively known as the International Space Exploration Coordination Group. This roadmap builds on a previous publication, The Global Exploration Strategy: the Framework for Coordination, that was released in May 2007. According to Stan Schroeder of Mashable.com, the new publication is “a vision of robotic and human space exploration within the Solar System, with the premise humans may one day live and work in space, the Moon and, perhaps, Mars.”

Common goals and objectives of each agency within the International Space Exploration Coordination Group are outlined in the recent publication. This list includes goals like “Develop Exploration Technologies and Capabilities” and “Perform Science to Support Human Exploration.” But the first objective on this list is “Search for Life.”

Schroeder explains that the human space exploration missions outlined in the roadmap are “a human mission to a near-Earth asteroid (NEA) in the 2030′s, a deep space habitat (DSH) in 2034, and – in the Moon Next scenario – a human mission to the moon in the 2020′s. The next step would be sending humans to Mars, a dream many of us would love to see come true in our lifetimes.” 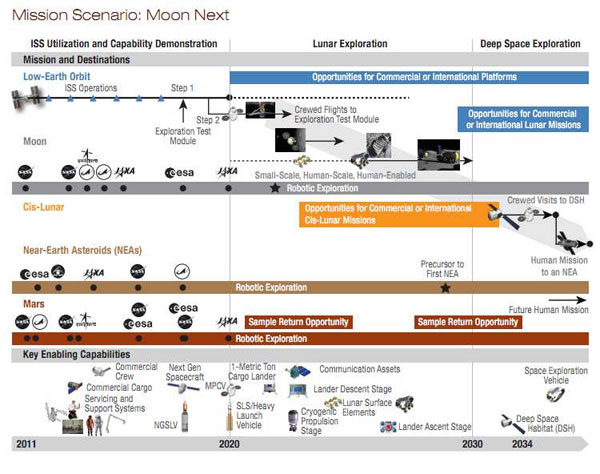 Outline for a human mission to the moon (credit: NASA)

The full 38-page Global Exploration Roadmap can be read HERE.