NASA considering a space station beyond the Moon

Reports indicate that NASA wants to build a space station beyond the far side of the Moon. 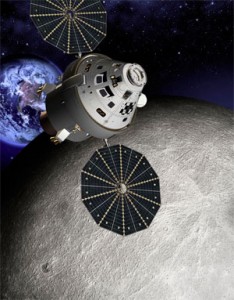 Artist’s conception of an Orion capsule at the L2 point on the farside of the Moon.
(Credit: Lockheed Martin)

This space station, dubbed the “Gateway Spacecraft” would be positioned approximately 38,000 miles from the Moon in a location known as EML-2, or Earth-moon Lagrange Point 2. The website io9 explains that, “At this spot, the combined gravities of the Earth and Moon create an equilibrium point, that would allow NASA engineers to position the spacecraft with a minimal amount of power required to keep it in place.”

NASA has high hopes for this outpost to be an international project. In a cost-saving effort, construction of the outpost would utilize spare parts from the International Space Station, as well as Russian and Italian hardware.

This space station would be useful because, as io9 states, the outpost would “serve as a staging area for future missions to the Moon, Mars, and potentially beyond.” Space.com reports that early missions to Earth-moon L2 “can support robotic operations on the far side of the moon, to explore unique geological features like the enormous and ancient South Pole-Aitken Basin, or to deploy radio telescopes in the quiet zone,” according to Josh Hopkins, a space exploration architect for Lockheed Martin Space Systems Company.

If things go according to plan, construction on the “Gateway Spacecraft” could reportedly begin as soon as 2019.