On Friday, April 5, NASA announced a new mission to aid in the search for potentially habitable worlds. 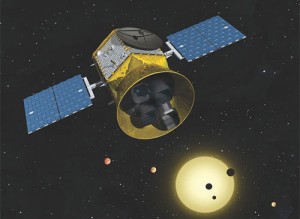 Forbes reports that NASA is granting MIT $200 million to fund the Transiting Exoplanet Survey Satellite (TESS). The primary mission of TESS is to identify planets in the habitable zone of their parent stars–that just right distance from the sun where liquid water can exist on the planet.

NASA explains that TESS will do this by using “an array of telescopes to perform an all-sky survey to discover transiting exoplanets ranging from Earth-sized to gas giants, in orbit around the nearest and brightest stars in the sky.” This process, known as the transit method, is used by NASA’s planet-hunting Kepler space telescope. But as George Ricker, a senior research scientist at MIT’s Kavli Institute for Astrophysics and Space Research and principle investigator on the TESS project, explains, “TESS will carry out the first-ever spaceborne all-sky transit survey, covering 400 times as much sky as any previous mission.”