Another mystery missile – in New York this time 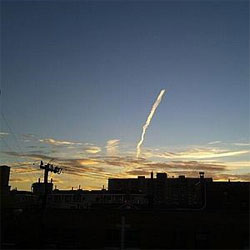 As with the UFO sightings hype of October, initiated by a mass UFO sighting in New York, it appears that media hype surrounding the mysterious Los Angeles coast vapor trail is going to result in additional “mystery missile” sightings around the country. The New York Post is reporting a New York mystery missile. Yesterday, a Queens resident photographed what he believed to be rocket in the sky above Brooklyn or New Jersey.

The investigation into the strange vapor trail off California’s coast has been called off by the Pentagon after reaching the conclusion that the trail was simply caused by an airplane, and an “optical illusion” from the camera’s angle is what gave the plane and its trail the missile-like appearance.

But there are many who refuse to accept the Pentagon’s explanation.

According to the New York Post, Doug Richardson, editor of Jane’s Missiles and Rockets magazine, said he was certain it was “a solid-propellant missile,” referring to the Los Angeles UFO. Further, the NYP states that the Pentagon, Navy, Air Force, Federal Aviation Administration, Coast Guard and North American Aerospace Defense Command have said that, following their investigations, they are unable to explain what it was.

As for the latest “mystery missile” in New York, the witness who took the photograph said that the trail he observed did not resemble the usual contrails produced by planes from the nearby JFK Airport.