A mysterious flash of light occurred on live television in Phoenix, Arizona during a morning newscast.

Mysterious flash of light on live TV in Phoenix 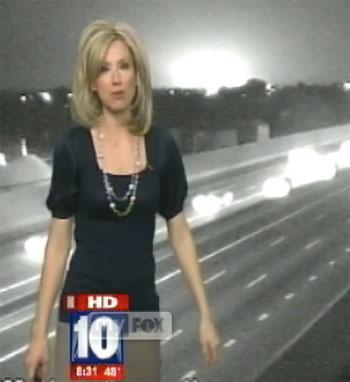 A mysterious flash of light occurred on live television in Phoenix, Arizona during a morning newscast on Thursday, March 8.

The light flash appeared during a traffic update on local Fox affiliate Fox 10. Anchor Andrea Robinson delivered the traffic report in front of a live video feed from a camera showing Phoenix’s 1-17 freeway and the northwest valley. The bright flash happened quickly, but the station certainly noticed. Fox 10 has since posted the video of this unidentified flash (link removed by source), showing the incident in slow motion.

Fox 10 checked with local utility companies to see if a transformer blew in the area at the time of the light flash, but the utility providers received no such reports. The station has since turned to its viewers, asking for help identifying the strange blast of light by encouraging viewers to leave comments on the Fox 10 Facebook and/or Twitter page.

The light flash is still unidentified.

Flashes of light and strange fireball UFOs in the sky have been somewhat common in recent months. And while scientists have attributed most of these occurrences to meteors, the attributions have been best guesses, and not conclusive identifications.

While this recent video from Phoenix doesn’t appear to show an unidentified object crashing from the sky, this is certainly a possible explanation for the explosion until an official explanation is produced.

What do you think caused this strange flash of light? Share your opinion on the Open Minds Facebook page.