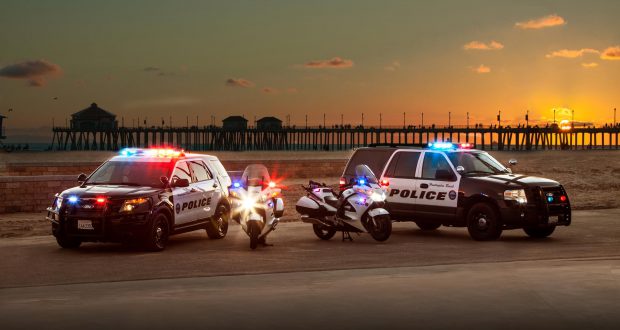 “On July 3, detectives contacted a male by the name of Jan Harzan after Harzan solicited sexual activity from a detective he believed was a 13 year old girl. The suspect solicited the minor to meet for the purpose of engaging in sexual activity, and when the suspect agreed to meet the supposed minor, detectives were there to take him into custody.” 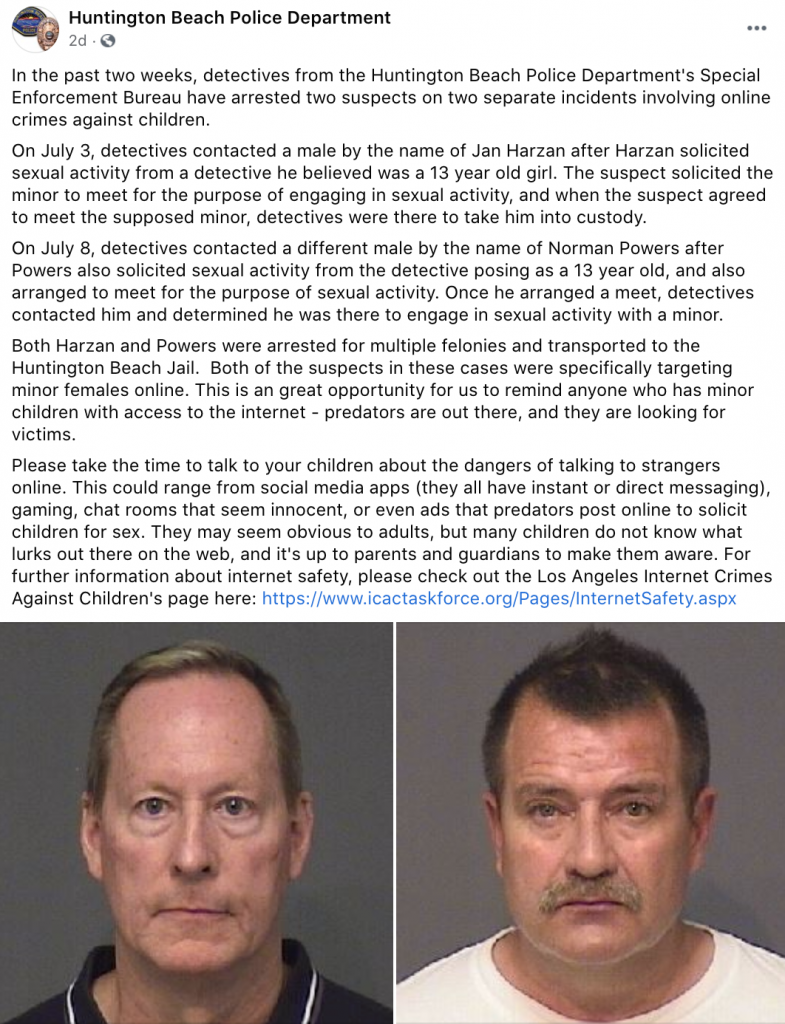 According to freelance journalist Tim McMillan, the Huntington Beach Police Department also sent out a press release. A journalist whom McMillan has worked with in the past, MJ Banias and Vice senior staff writer Anna Merlin were the first to publish a mainstream article on Harzan’s arrest.

Yesterday, July 15, the MUFON Board of Directors responded with a short statement: 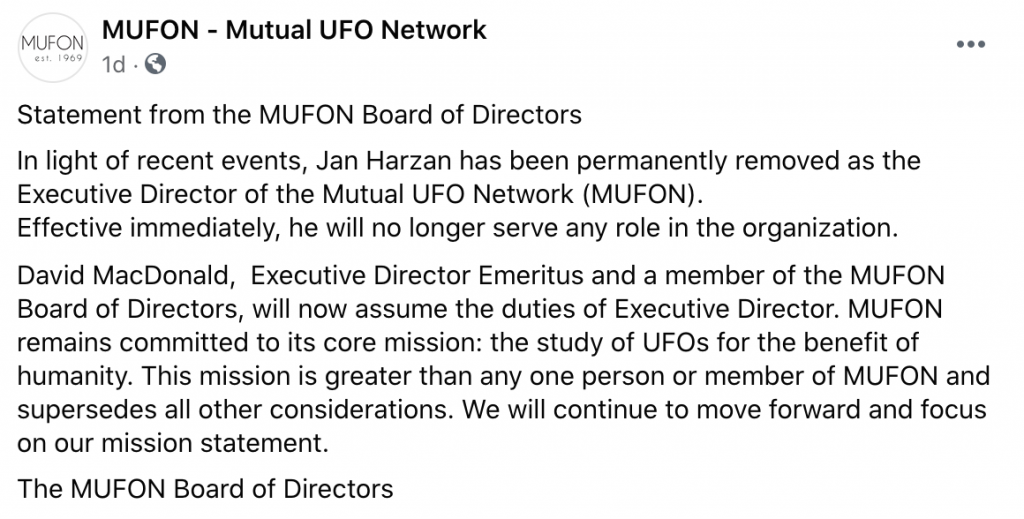 “In light of recent events, Jan Harzan has been permanently removed as the Executive Director of the Mutual UFO Network (MUFON). Effective immediately, he will no longer serve any role in the organization.

David MacDonald, Executive Director Emeritus and a member of the MUFON Board of Directors, will now assume the duties of Executive Director. MUFON remains committed to its core mission: the study of UFOs for the benefit of humanity. This mission is greater than any one person or member of MUFON and supersedes all other considerations. We will continue to move forward and focus on our mission statement.”

As the statement notes, MacDonald has previously served as MUFON’s Executive Director. MacDonald has a colorful past. Vice covered his previous work in a 2015 article titled Raunchy Tales from the Pilot of a Mile-High Club Plane. The subtitled reads: “Pilot David MacDonald makes a living flying folks around—while they get it on in the back of his plane.”

When asked if MacDonald would get requests beyond just taking couples up to have sex, he responded:

“Yes, I have. We had somebody bring their dog. We’ve had requests for threesomes. We actually had a request from some people in Iceland. Now, these folks have too much time on their hands in Iceland and they wanted to know if we had an airplane which would accommodate ten couples and are there any restrictions, save damage to the airplane or injury to the pilot.”

In the article, he also said that clients had asked him to join them, but he always refuses.

“We weeded out a number of criminals and scam artists and at least one pedophile.” MacDonald explained. “Can you imagine sending a thief or a pedophile into someone’s house? I don’t even want to think about those liability issues.”

In the spirit of full disclosure, I was a MUFON field investigator for a few years in the early 2000s. I also handled MUFON public relations and served as their official spokesperson in the late 2000s. I do not bring up MacDonald’s past to equate his legitimate business with the alleged heinous crime committed by Harzan. However, MUFON leadership has always been predominately old, white, and male. Harzan’s alleged offense and the mile-high airline have in common that they both can be considered “creepy” or “pervy.”

Putting a PR hat on, it is horrible to replace an old, white alleged pedophile with an old, white guy who ran a pervy airline, especially if you want to avoid this sort of media attention. What message is being sent to the public?

I am not the one who feels this way. In the Vice article regarding Harzan, the authors point out a couple of MUFON scandals involving racist comments from leaders within the MUFON organization.

The first scandal was also covered in an article by Newsweek. John Ventre was the state director for Pennsylvania when he went on a tirade on Facebook about a Netflix show he accused of promoting “white genocide.”

“Everything this world is was created by Europeans and Americans,” Ventre fumed. “F’ing blacks didn’t even have a calendar, a wheel or a numbering system until the Brits showed up.”

Harzan responded that MUFON had nothing to do with an individual’s social media. However, the backlash grew, and after several prominent members threatened to quit, Ventre was finally relieved of his state director position. Many were told he was kicked out of MUFON altogether, but that was not the case.

In January of 2018, scientist Chris Cogswell took the position of MUFON’s Director of Research. He quit in April once he found out that Ventre was still working for MUFON.

“When I first joined MUFON, taking on the Director of Research position, I believed this issue [with Ventre] had been dealt with,” Cogswell told Newsweek.

Cogswell says in April he received an email from Ventre regarding the annual MUFON symposium. Ventre was organizing it. Within hours of receiving the email, Cogswell resigned.

More recently, another MUFON state director, Ken Pfeifer, posted racist comments on his Facebook as well. Regarding Black Lives Matter, he wrote: HOLY SHIT….I WOULD OF PICKED THEIR COTTON FOR THEM….IF I THOUGHT IT WOULD END THIS BLM RACIST MADNESS.”

Despite calls for concern, Harzan said he did not see any racist messages on Pfeifer’s Facebook. Pfeifer kept that post up until recently. He still has a meme posted that reads: “Tear gas isn’t working. Lob job applications at them and see how fast they run.”

How is this all connected? MUFON leadership has always wondered why they can’t get more young people, more diversity, and more women involved. Meanwhile, the latest director has been arrested for being an alleged pedophile, the previous/new director ran a pervy airline, and racist comments by MUFON leaders are not only tolerated but allowed to continue without consequence.

Imagine being a young woman interested in this topic or a person of color. Would you feel comfortable going to a MUFON meeting at this point? As a parent, would you want your child involved with such an organization? MUFON’s problems need a much stronger response than only letting Harzan go.

Despite appearances, MUFON is full of great people interested in a similar topic, UFOs. Having recently lived in Arizona, I am great friends with the people who run that chapter. In fact, they are some of my closest friends. I have been a MUFON supporter for many years. I do not feel these controversies represent the organization as a whole, but the rot from within won’t go away by ignoring it exists.

NOTE: During all of these controversies, as a previous spokesperson for the organization, I have sent MUFON board members and directors emails regarding my suggestions on how to deal with these issues. Although we have worked together on other matters, my suggestions on these matters have not been acknowledged.