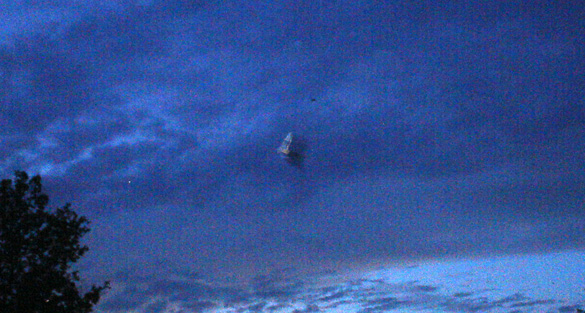 The Mutual UFO Network (MUFON) posted a UFO photo of the week recently that was taken in Kentucky in 2009. It shows an odd object in the sky that the witness says looked completely different when viewed with the naked eye.

The witness says that on September 5, 2009 around 7:40 pm he was sitting outside on a picnic table when he and his wife witnessed what appeared to be a sphere shaped cloud about 50 feet in diameter. They say it was traveling across the sky behind five “large black birds.” However, the witness says the wings of the birds did not appear to move, and furthermore, their wingspan appeared to be 16 feet wide. He says their torsos were slender and long for their size.

The witness says the cloud seemed to move over a ridge and then drop down closer to the ground after it cleared it. They then lost sight of all of the objects when they traveled in front of the dark background of the ridge.

About 30 seconds later the black cloud reappeared. His wife grabbed the camera to take pictures and when the flash of the camera went off, the cloud seemed to change direction. She took a second picture, but the cloud was already gone by then. 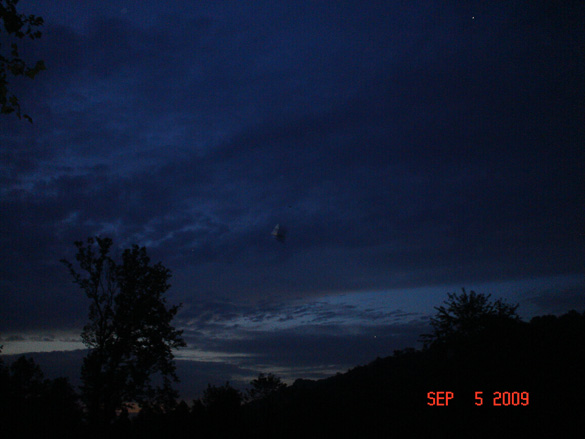 They were shocked when they reviewed the first picture and instead of the cloud they saw there were two objects in the sky. One of them had a strange shape the witness describes as a “3 sided bell shaped craft with a dome shape bottom.” He estimates the object to be 12 feet wide and 16 feet high. 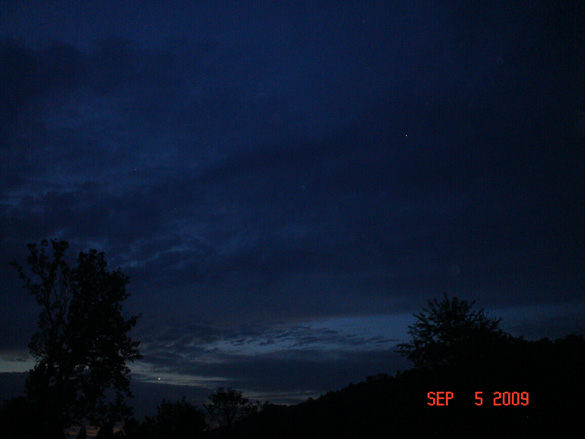 Second picture taken by the witnesses. The object is gone. (Credit: MUFON)

The movement and characteristics described do not fit birds and clouds, although the object captured on camera could be a very strange cloud. The witness said they captured two objects in the picture. However, I can only make out one. But the one they got is very strange. 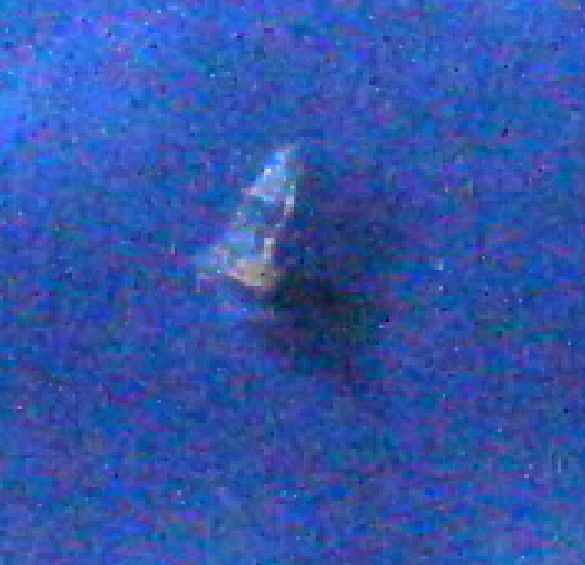 Close-up of the “bell shaped” UFO. The contrast has been enhanced. 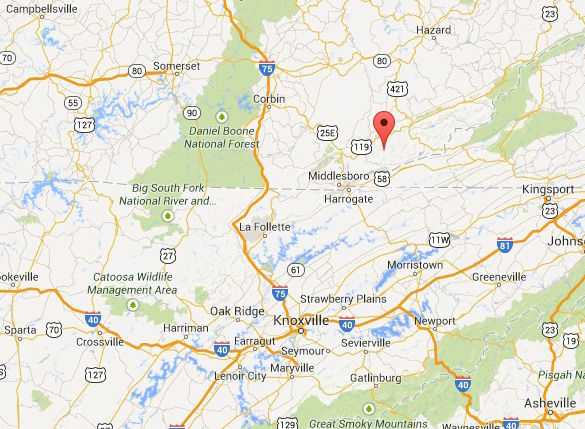 The witnesses reported that they live in Pathfork, which is about 90 miles northeast of Knoxville, TN. (Credit: Google Maps)

Here is the witness testimony verbatum:

I was outside sitting at my picnic table late that evening. When I noticed a strange black cloud about 50 foot in diameter and shaped like a sphere came up over a low ridge line about half a mile away. This cloud was traveling south and following 5 very large black birds that never moved their wings..just glided along. The birds had a wing span of about 16 feet and slender long bodies for their size.

At first I thought the small black cloud was a puff of smoke coming from the strip mine after blasting the hill side or smoke from a large piece of heavy equipment up on a higher ridge behind the lower ridge.

The black cloud seemed to drift along and dropped down lower after clearing the top of the smaller ridge.

This black cloud was about 60 feet above the black birds trailing behind them and was following their direction toward me on a downward path until I lost sight of them and the cloud against the dark background of the ridge. 30 seconds went by until the black cloud reappeared closer to us. I told my wife to grab the camera to take pictures of this strange cloud while I watched were it is going. I never saw the 5 strange black birds after I lost sight of them, just only the black cloud.

My wife got the camera and as soon as she took the picture the flash of the camera caused the black cloud to immediately changed direction and sped off at an incredible speed. My wife took a second picture as fast as she could but did not get the black cloud in the second one. Once we looked at the pictures on the digital camera we were shocked that exactly where the black cloud should have been was this strange craft with another even larger craft higher up that was traveling in the same direction that was not visible to us. In the pictures I estimated that the craft was 12 feet in diameter at its base and 16 feet high 3 sided bell shaped craft with a dome shape bottom.

It is a strange picture indeed. Do you see birds, a strange cloud, or something else? Let us know below.