...with a healthy presence of Ph.D.s and scientists, a lack of Star Trek uniforms and an abundance of jackets and ties, MUFON provides the perfect venue for representing this phenomena in the way that serious researchers would like it to be presented.

The Mutual UFO Network (MUFON) held its annual Symposium this past weekend. It was a sober, serious event that garnered some positive media coverage from local media in Denver, the host city for the event.

As the one previously responsible for MUFON media, and assisting the local MUFON chapter with Symposium press coverage, an advantage I had with the media is MUFON’s serious approach. While some in the UFO community criticize MUFON for not including more controversial subjects, such as channeling and alien communications, the serious scientific focus typically attracts more media friendly coverage. While other conferences give the media more unconventional quotes and subjects to poke fun at, science appears to be not as much of a laughing matter. 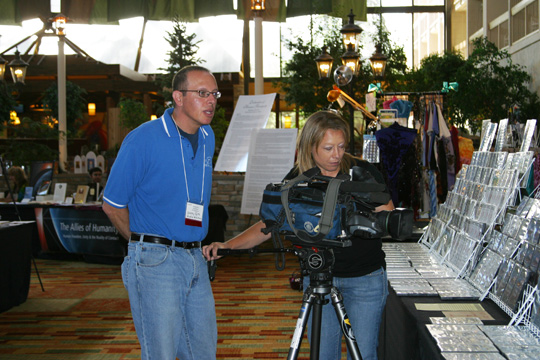 Barry Roth, MUFON Media Relations, with a camerwoman from the local CBS affiliate. 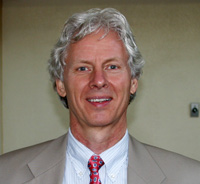 Denver is also the place where they will be voting in November whether or not to create a Commission for Extraterrestrial Affairs. The founder of what he calls the Extra Campaign, Jeff Peckman, was present at the MUFON conference. His experiences with the local media have been hot and cold, either way he has gotten a substantial amount of attention himself. The focus of his campaign takes a step further than just determining whether or not there is an extraterrestrial presence, but to actually consider the ramifications of the fact of the presence. Of course this is a much more difficult concept for the public to swallow. It would be expected that such an initiative would be heavily ridiculed, and there is no lack of ridicule that Peckman faces, however he is a likeable guy who chooses his words carefully, and along with his great camera presence, the media has responded much more amenably than they probably would have with a more abrasive or confrontational approach.

Either way, with a healthy presence of Ph.D.s and scientists, a lack of Star Trek uniforms and an abundance of jackets and ties, MUFON provides the perfect venue for representing this phenomena in the way that serious researchers would like it to be presented. I always feel good when I walk into a MUFON Symposium with a skeptic or a media person and they are initially taken aback. As portrayed in the movies, they expect to see a scene similar to a Sci-Fi convention; instead it looks more like a gathering for dentists.

Although MUFON gets accused of having too small a focus, I always think of the saying “Jack of all trades, master of none.”, and their focus is apparently successful. They are still the longest running, largest, and most prolific UFO research organization of them all. You will find in most serious UFO researcher’s biography some sort of affiliation, or position held with MUFON. There is also no lack of organizations that represent the other areas of this research. If you live in Denver, and things go well for Peckman, you may even find yourself on a city commission for Extraterrestrial Affairs. That would be pretty cool.

Articles from the Denver press: