A strange flaming ball of light is just one sighting among many in a recent flood of sightings. 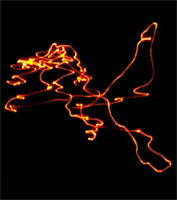 New Zealand has proven itself to be a major UFO hotspot with regular UFO sightings. A strange flaming ball of light is just one sighting among many in a recent flood of sightings. Residents observed the flaming ball in the night sky above Hawera on Tuesday, and, according to Stuff.co.nz, one resident described the object as “a flamey-type object with a dark shadow on top which looked to be a pyramid shape with a round top.” After the object hovered in the sky, this witness explained, “It turned its flames off and it looked like it was cooling down.”

Strange lights in the skies above Hawera and the surrounding areas have been common in recent months.

According to Stuff.co.nz, the Airways Corporation, responsible for monitoring New Zealand air traffic, has no explanation for the UFOs, and recorded nothing unusual on Tuesday night when the strange flaming ball of light was witnessed by residents.