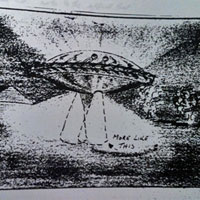 The New Zealand Defence Force (NZDF) released the last three volumes of their nearly sixty years worth of UFO (or NZDF’s preferred term, UAS—Unidentified Aerial Sighting) files yesterday. But the NZDF will no longer accept UFO reports or keep files on them. According to TV3 in New Zealand, the NZDF released a statement yesterday stating, “The NZDF does not have any role or expertise in respect of UAS, nor does it devote resources to record or investigate them and it has no evidence to substantiate the existence of these alleged phenomena.” The NZDF is advising UFO witnesses to contact police with their sighting reports.

The newly released files join the more than 2,000 pages of UFO files that were released back in December.