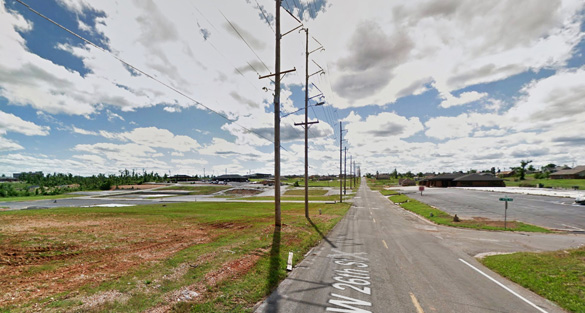 Missouri couple says UFO was ‘bigger than a house’

Missouri witnesses in Joplin reported watching a silent, boxy object “bigger than a house” traveling about 300 feet off of the ground about 9:15 p.m. on July 8, 2014, according to testimony in Case 57853 from the Mutual UFO Network (MUFON) witness reporting database.

The husband and wife reporting witnesses were traveling home when they noticed a man in the street trying to flag them down and pointing to the sky.

“He was walking his dog who was barking wildly at the object and jumping high into the air,” the witness stated. “It had approached from the northeast. As we watched, it crossed directly overhead. It looked to be about 300 feet off of the ground.” 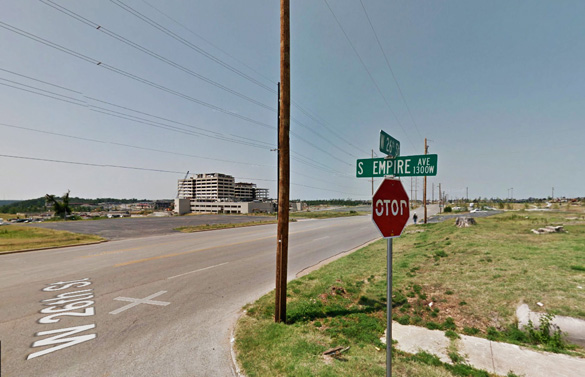 Three witnesses in Joplin, MO, watched a silent, boxy-shaped object ‘larger than a house’ move under 300 feet on July 8, 2014. Pictured: A street in Joplin. (Credit: Google)

“It was off-white in color appearing to be illuminated by a yellowish light coming from within it. It was as big or bigger than a house and was completely silent.”

The object’s shape was not aerodynamic.

“It was boxy-shaped with multiple angles kind of like on a stealth airplane. It looked like it had darkened square windows in parts of it. It was flat on the bottom with round orange and red randomly flashing lights all around the bottom edge. The lights were round with a dark center – like donuts. They were the size of stop signs.”

The object moved southwest and then south of their location and appeared to be traveling at about 100 mph. They then noticed a change in the lighting.

“It suddenly turned off its lights. All of them went off like they were quickly dimmed and not just cut off. Two lights on the back, one orange and one red, stayed on slightly longer than the others – about half a second. These lights seemed to have a burnt look to the dark centers as if maybe exhaust or flames had at one time come out of there.”

The object then appeared to be descending like it was going to land or possibly crash.

The witnesses also noticed the strange behavior of animals in the area.

“I noticed that along its flight path every dog was going crazy, barking and howling.” 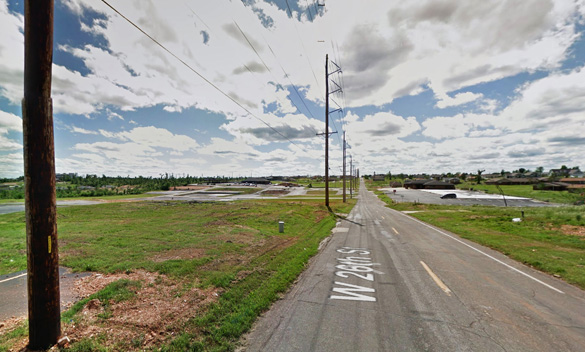 Three witnesses said the object appeared to land or was about to crash. They attempted to follow the UFO across Joplin, MO, and experienced odd disturbances to the vehicle they were driving on July 8, 2014. On May 22, 2011, Joplin was struck by a powerful EF-5 tornado which resulted in at least 158 deaths and more than 900 injuries. Pictured: A street in Joplin. (Credit: Google)

The three witnesses then decided to follow the object in the couple’s vehicle.

“We were using a spotlight that plugs into the cigarette lighter to search the fields next to the roads. After driving about a mile, the spotlight suddenly went very dim and the seat belt warning beeper started sounding repeatedly and quickly. Also the Jeep’s automatic transmission would not change gears. When I tried to go into reverse it would not go into gear without a struggle. All of this continued for about five minutes and then suddenly everything went back to normal. It is a newer model Jeep Wrangler and has never done anything like this before.”

The group then became nervous, but decided to keep looking.

“We continued searching nearby roads and fields but didn’t find anything unusual. On our way back home, as we passed the same location as before, our spotlight again dimmed and the beeping alarms in the Jeep began again.”

Despite the vehicle’s problems they again continued to search for the object.

“Shortly after, we turned around and passed this spot a third time, but this time nothing happened. We finally gave up our search and went home. By then the spotlight was working at full power and the Jeep was working properly and nothing else occurred. The man that flagged us down turned out to be a neighbor who lives about a block away. He is a retired commercial airline pilot from England. He said he had never seen anything like this before.”

No images or videos were included with the MUFON report, which was filed on July 9, 2014. Missouri MUFON is investigating. Joplin is a city in southern Jasper County and northern Newton County in the southwestern corner of Missouri, population 50,150.