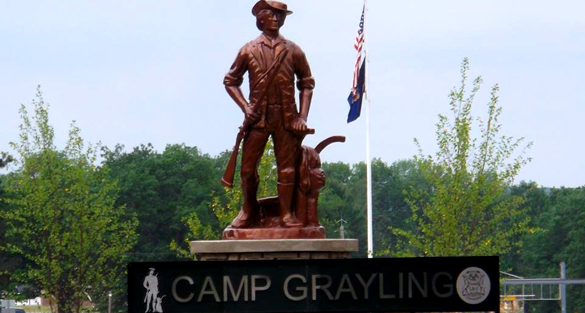 A Michigan military veteran at Roscommon reported watching a hovering black, triangle UFO near Camp Grayling with an odd light configuration, according to testimony in Case 80122 from the Mutual UFO Network (MUFON) witness reporting database. 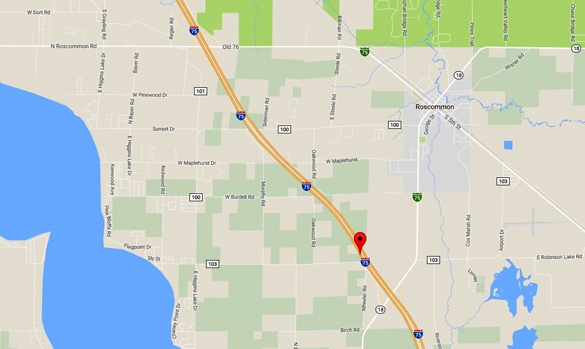 The witness first noticed a low set of lights while traveling southbound along I-75. (Credit: Google)

The military veteran with training estimating distances and vehicle sizes was traveling southbound along I-75 near Camp Grayling at 10:01 p.m. on October 30, 2016.

“I noticed a large, but low set of lights – green and red, west/east respectively – on the horizon,” the witness stated. “At this distance it was approximately 20-25 degrees from the horizon. After getting a mile or so closer, I gave it more attention as I thought it was an aircraft landing at Camp Grayling, or one possibly training.”

The witness moved another mile or so closer.

“I remarked to myself that it hasn’t changed altitude, and now I could see an alternating set of strobe lights blinking. I again thought to myself that maybe it was a helicopter. As I closed the final mile between myself and the craft I began to get a better sense of its size as the gap between the red and green lights grew. It was as large, if not larger than a CH47 Chinook (the reason for the two sizes specified, this craft did not change size).” 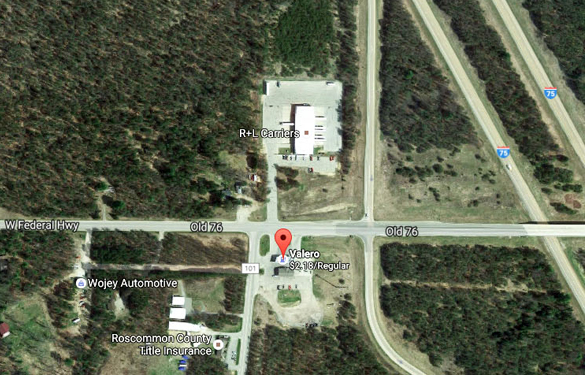 The craft was seen directly over the north bound lanes of I-75 and approximately 500 meters north of Highway Old 76. (Credit: Google)

Then another light became visible.

“This was a solid white light. Just as I was within the last 100 meters to the object, I still could not identify what it was against the night sky.”

The witness slowed his vehicle down a few mph and rolled the window down.

“The craft was directly over the north bound lanes of I-75 and approximately 500 meters north of Highway Old 76. As I passed underneath, yet another light became visible, but this one was much smaller than the three corner lights, larger than the strobe lights, but was much dimmer, a clear, crisp border to the craft could be seen as it was darker than the night sky. Conditions were clear and unlimited. Unbelievably it was a triangle.”

The lights again from a distance appeared to be red and green.

“When I was directly under the craft, the color was closer to red-orange, and blue-green. The white light that did not strobe was located on the ‘point’ of the triangle facing south, blue-green was west, red-orange was east. The alternating strobe lights were located between the dim center, white light and the two flanking lights, oriented east east-west. The corner lights also appeared to be ‘fuzzy’ or have an ‘aurora’ to them.” 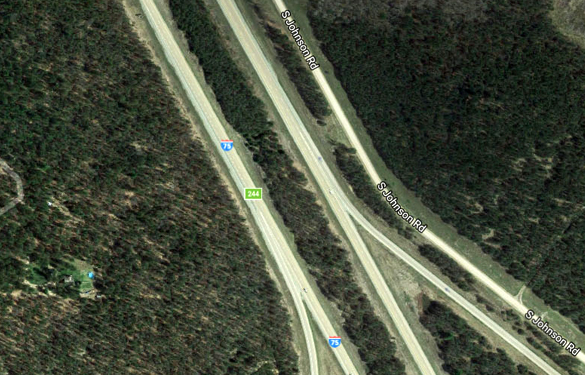 The object was between 125 and 200 meters in altitude. (Credit: Google)

The witness estimated the altitude between 125-200 meters.

“Seeing all this made me do a double take from the shock of what was a hovering craft in a shape and configuration so unfamiliar. Approximately 100 meters past (south) of the object I lost sight of it. Followed quickly by the exit sign for Old 76 (Exit 244). As I realized what I had seen, I began taking notes of all pertinent data, including time (10:01 was when I began taking notes), size, altitude, the color and orientation of the lights as well.”

No images or videos were included with the MUFON report, which was filed on October 31, 2016. Michigan MUFON Chief Investigator Daniel Snow is investigating. Please remember that most UFO sightings can be explained as something natural or man-made. The above quotes were edited for clarity. Please report UFO activity to MUFON.com.