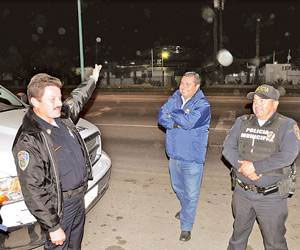 A UFO flew over an airport in Mexicali, Mexico last week, and the craft was reportedly pursued by police.

According to La Voz de la frontera, police received hundreds of calls about a strange device in the air. The UFO was seen in the area of the Mexicali airport, and was described by witnesses as a round object emitting white light. Witnesses also reported seeing blue and yellow flashing lights on the object.

One of the police officers who pursued the object explained that the UFO moved at very fast speeds, moving up, down, and sideways, and would suddenly change its course.

The website i09 suggests that a UFO recorded on video over Tijuana, Mexico on January 27 could be the same UFO that “taunted police” in Mexicali last week, but that is simply speculation.

Here is that video: