Home / Articles / Mexican politician writes about ETs in history
She has a long career in government, including many high-level cabinet posts, Ambassador of Mexico to the UN Food and Agricultural Organization (FAO) in Rome, Economic Advisor to the Presidency, delegate to various international conferences, etc...

The publication of the novel Los Círculos de los Dioses (The Circles of the Gods) by Guadalupe Rivera Marín earlier this year, which deals with the presence of extraterrestrials in Mexico’s ancient history, has caused quite a stir in Mexican intellectual circles. Perhaps this is not due so much with the subject matter itself—UFOs, after all, have been a regular feature in the Mexican media for many years—but because of the author’s high profile and longstanding prestigious career in politics, academia and culture.

Born in 1924, Guadalupe Rivera Marín is one of the daughters of Diego Rivera (1886-1957), the most famous of the Mexican muralists, and his second wife Guadalupe Marín (portrayed by actress Valeria Golino in the 2002 popular movie Frida, where Salma Hayek plays the main role of Rivera’s third wife and well known painter Frida Kahlo, and Alfred Molina that of Diego Rivera). Guadalupe Rivera graduated as a lawyer at UNAM (National Autonomous University of Mexico), one of the country’s most prestigious educational institutions, where she also studied public administration, economy and international relations. She has a long career in government, including many high-level cabinet posts, Ambassador of Mexico to the UN Food and Agricultural Organization (FAO) in Rome, Economic Advisor to the Presidency, delegate to various international conferences, etc. A member of the Institutional Revolutionary Party (PRI) since 1960, she served several terms both as Deputy (Congresswoman) and Senator in Mexico’s Congress. Guadalupe Rivera was also a law professor at UNAM and serves currently as president of the Diego Rivera Foundation. She published several books on legal and economic issues, memoirs dealing with her famous father and more recently, fiction. 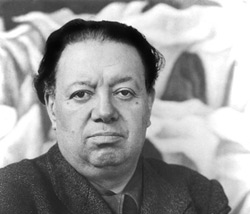 The Circles of the Gods is the first installment in a trilogy and her first novel. The publisher’s (Plaza y Janes) blurb describes it in the following words: “The text is the result of investigations undertaken for many years in what the author calls ‘history-fiction,’ [combining] historical and archaeological data, pre-Hispanic mythology and popular legends, real and imaginary characters. Starting with a concrete enigma, its goal is to decipher the most remote origins of the Mexicans. The work is part of a trilogy that describes who were the extraterrestrial gods, from where they came and how they arrived to this planet, as well as explaining why they chose the Mexican territory to plant their seeds and watch them secretly throughout the centuries.”

The novel begins with the story of Pedro Raygadas, a young member of a wealthy family in Querétaro, who is gravely wounded during the Cristero War in the late 1920s. (The Cristero War was a Catholic rebellion against the secular PRI government formed after the Mexican Revolution.) Raygadas is rescued by an Indian princess, with whom she has a son, Vicente. However, Raygadas must escape to Europe when the Indians blame him for the death of the girl during childbirth. Later on, Pedro explores a mercury mine that he inherited from his family and finds a mysterious cave known as “Cueva del Dios Viejo” (Cave of the Old God). “Among the Indians there is a legend,” continues the publisher’s description of the book, “that this is a very dangerous place because that’s where the Tizimines go.” The Tizimines are “evil witches that become balls of fire and fly over the air.” From these “balls of fire” a plot emerges which takes you to the “feathered serpent” Quetzalcoatl, the Christ-like figure who brought civilization to the ancient Mesoamerican peoples and the flying saucers so popular in today’s Mexico. The trilogy will continue with the second volume to be published at the end of this year, La sabiduría de los dioses (The Wisdom of the Gods), where Pedro Raygadas, now an anthropologist, studies the phenomenon with a scientific basis; and Los orígenes (The Origins), to come out in 2011, which will explain the place of origin of the extraterrestrials.

IT ALL STARTED WITH HER OWN SIGHTING 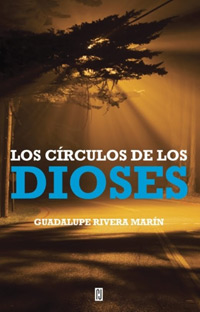 Cover of the novel The Circles of the Gods (image credit: Plaza y Janes)

In several interviews given to various Mexican newspapers and media, Guadalupe Rivera explained that the first spark of her interest in this kind of phenomena began with a personal experience in the 1970s when she was traveling in a vehicle in the area of Sierra Gorda of Querétaro in her capacity as director of the Federal District’s Economic Programs and Studies. In an interview with journalist Angel Vargas published in La Jornada, Rivera explained that, “as we passed a village called Vizarrón de Montes, the vehicle stopped and all the lights in the area went off. At that very moment what seemed like a craft passed over us; the locals know these as ‘red balls’ or ‘tzinziniles’ in the Otomi language.” Similar phenomena have also been reported in Guanajuato and so it’s believed that “they travel from the Gulf of Mexico to the sierra.” She added that many years earlier, in 1921, her own father Diego Rivera and another famous Mexican painter, David Alfaro Siqueiros, had seen a similar object as they returned from Europe in an ocean liner.

Her experience in the Sierra Gorda sparked her interest to research further the significance of the so-called tzinziniles or Tizimines in Mexican folklore and mythology. “We were powerful and cultivated nations that disappeared with the flood,” she said. “The Popol Vuh is nothing else than the narrative of how the earth was recovered after the flood. However, I always thought that this must be linked to a spacecraft. Later, I thought in the feathered serpent [Quetzalcoatl].” The Popol Vuh is a collection of Maya creation stories and myths first rendered in Spanish, from older Quiché sources, around 1714 by the Dominican priest Father Ximénez. Guadalupe Rivera mentioned that in this book there is the story of a god that came and stood over the waters and his green and red feathers illuminated the waters. “Those who came from it,” she added, “could move mountains, dry rivers and return to Earth the capacity of allowing the plants to grow.” She surmised that all this must have been done by space aliens since humans would have not been able to accomplish such a job.

Rivera’s earlier research was published in the late seventies not as fiction but as a series of articles for Contactos Extaterrestres, a good quality newsstand magazine then published in Mexico by Editorial Posada. I have some issues of this magazine in my files and was actually able to locate some of her articles, which are in the vein of the ancient astronaut or paleocontact theory popularized in the works of Erich von Däniken, Zecharia Sitchin and others. One of her articles is titled, “Cosmic Origin of Indian Festivals” (CE, Vol. II, No. 11, 1977). “In our concept,” she wrote in this article, “one way of doing American astro-archaeology is to search in engravings, paintings, bas-reliefs in the monuments, pottery and tombs, in the monoliths that fill the museums, in the illustrations from the ancient codices and in the mythological stories and rites that survived the colonial destruction, all those traces that can lead us to know what was the relation between the creation gods and the first humans, and in which ways the memories of an American Golden Age, when gods and men shared the work of generating a new way of life, endured through the ages.” 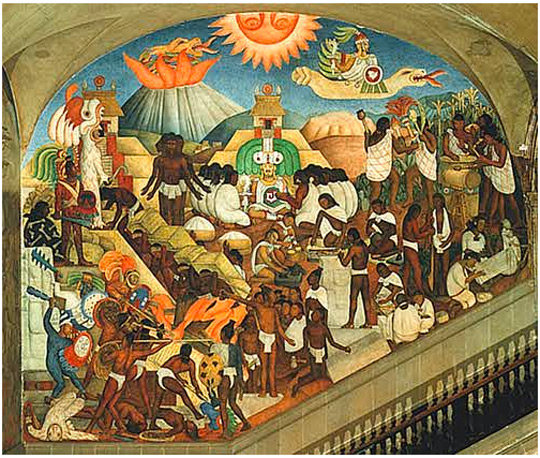 She goes on to describe in some detail the myth of the flying serpent Gucumatz which stood over the waters in the Popol Vuh and then some Indian ceremonies and festivals, including that of “los Voladores” (the flying men), in which four warriors fly suspended from long ropes mounted on a tall pole, still practiced in Mexico to this day. In other articles for Contactos Extraterrestres published later in 1977, Guadalupe Rivera developed a series titled, “World Mythologies and Current Astro-Archaeology,” where she went beyond Mesoamerica to cover the myths and legends from the Near East, Greece, Polynesia, India, Egypt, etc. 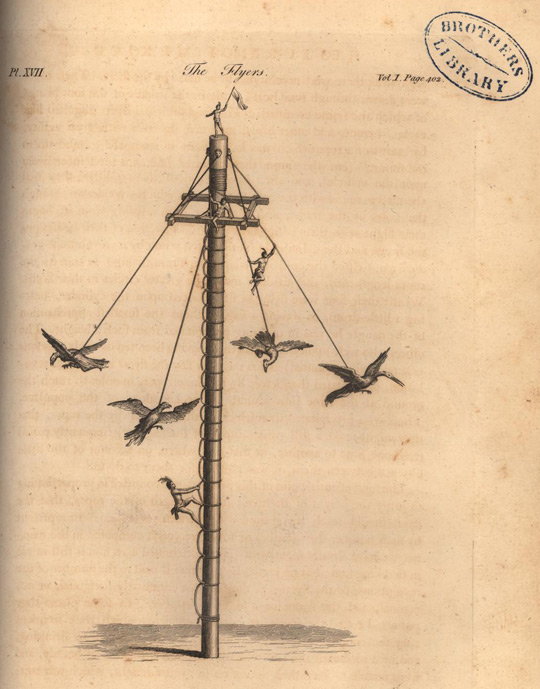 Ritual of “The Flyers” from the 1807 English translation of Father Clavijero’s History of Ancient Mexico.

In her interview with Vargas, the 85-year old Rivera explained some of the reasons that led her to wrote the novel The Circles of the Gods: “I did all this with the idea that Mexicans should know—although nobody seems to want to know—that we are as ancient or more than the Egyptians; we are part of a cultural belt around the world that goes back before the flood.” Vargas asked her if she didn’t fear that people would question her credibility or mental health. “I don’t care,” she answered. “I went to see the neurologist because I heard noises in my head; they did magnetic resonances. When I asked the doctor if I was going crazy, he rsponded that I was perfectly sane. I commented that people might say that I am crazy because of this novel and then he said he would defend me.” 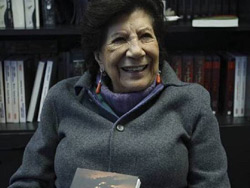 Vargas then asked how much of the novel was fiction and how much was fact. “To me it’s all reality,” responded Rivera, “with the exception of those elements that are basic in any novel. There must be characters, love, passion, action. It’s a total invention, for instance, that I placed the story during the Cristero War, or that the protagonists find a spacecraft. But it is true, for example, that one of those colossal Olmec heads exists in the Bucareli mission (in Sierra Gorda), which almost no one knows about.” Vargas finally asked her why she thinks the ET contact was stopped in the past. “Because we betrayed the gods and became avaricious, greedy, arrogant,” she responded. “Instead of utilizing science for the good, we have used it for bad purposes.”

Whether Guadalupe Rivera’s novel becomes a bestseller or has a significant impact in the culture remains to be seen, but the mere fact that a person of her political and cultural background is even discussing the ET presence in our history is already significant enough.