Stephen Hawking warned against contacting aliens. His daughter Lucy, however, ignored this warning. 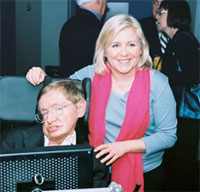 It seems as though the world has been mildly obsessed with the idea of an alien invasion ever since the Discovery Channel aired a documentary in April 2010 entitled “Into The Universe With Stephen Hawking,” in which renowned theoretical physicist Stephen Hawking cautioned against attempting contact with extraterrestrials, who he suggested are likely hostile. His daughter Lucy, however, ignored this warning.

In February 2011, Lucy Hawking, writer-in-residence for Arizona State University’s Origins Project, launched a writing contest called “Dear Aliens,” which asked students to answer the following questions: What would you say to extraterrestrials if earthlings are contacted from outer space? If you had to speak for humanity, what would you say?

Here is a video with Lucy, who talks about the writing contest and the importance of encouraging students to begin thinking about the issue of communicating with extraterrestrials: 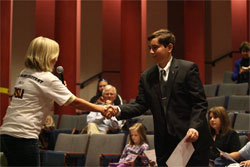 According to the Arizona Republic, nearly 1,000 messages were submitted to the contest. Benjamin Lee, a seventh-grade student from Mesa, Arizona won the contest. At a ceremony in early April 2011, Stephen Hawking was present to read Lee’s message:

Dear Aliens, Please help us save our world. Not from you, from ourselves. We are destroying our planet and need help from more technologically advanced beings. Our planet is polluted, many nations are at war, there is civil unrest, and our economy is in turmoil.

And despite Stephen Hawking’s grim warning against attempting alien contact, Lee’s message was beamed into space, where it was bounced off the moon. 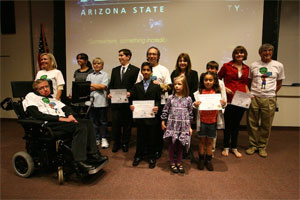 Professor and theoretical physicist Paul Davies was also involved with the “Dear Aliens” contest. Davies is head of the SETI (Search for Extraterrestrial Intelligence) Post Detection Task Group, which means that, when contact is made with extraterrestrials, it is Davies’ responsibility to determine what message to send back to the extraterrestrials.

Another message to extraterrestrials was recently sent to space–cyberspace that is. Hank Green of the Vlogbrothers (Hank and John Green, a.k.a. the Vlogbrothers, are two of the most successful YouTubers) just posted a video to YouTube titled, “A Letter to the Aliens.” According to Ology.com, this video gives extraterrestrials “a crash course in human biology and society.”

But as Astrobiology Magazine recently pointed out, technology could prevent messages from us ever reaching extraterrestrials and vice versa: “[I]f the Universe is full of intelligent, social, communicative but non-technological dolphins and the like, then there will be no radio beacons to transmit signals. The Universe could be full of life, of intelligence, and we would never know it.”