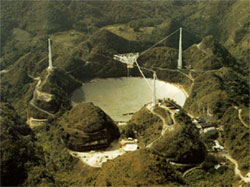 Groups like SETI (Search for Extraterrestrial Intelligence) here on Earth that listen for signals from extraterrestrials are often strapped for cash, and operate with very small budgets. A new study, completed by astrophysicist Gregory Benford, his brother James, president of Microwave Sciences, and James’ son Dominic of NASA, suggests the notion that perhaps extraterrestrials who may be trying to send us signals might be strapped for cash themselves, and these starving-scientist aliens could be using a more budget-friendly method of attempting to contact us.

The study suggests that budget-conscious extraterrestrial scientists would probably be more selective in their broadcasts, limiting their transmissions to frequencies with less astronomical background noise, and sending only short pulses, rather than an energy-hogging continuous broadcasts.

If extraterrestrials attempting to contact us are implementing a more conservative approach than scientists have previously assumed, then adjustments to the “listening” process would be required to prevent those messages from going unnoticed.

This topic was discussed on the July 26, 2010 episode of Open Minds Radio.