Home / Articles / UFO News / Mass UFO sighting in Vladivostok
Hundreds of witnesses have reported seeing the unidentified object in the sky over this city on the eastern edge of Russia. 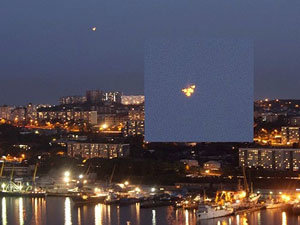 A mass UFO sighting occurred on the evening of September 14th in Vladivostok, Russia.

Hundreds of witnesses have reported seeing the unidentified object in the sky over this city on the eastern edge of Russia. The object has been described as a triangle-shaped UFO with four golden-colored lights. The object remained in the sky for more than two hours.

UFOs are not uncommon in the region, and, in fact, Vladivostok is where a UFO allegedly crashed in 1986, and this incident is referred to by some as “the Russian Roswell.”