Major UFO Convention Returns to the Phoenix Area This Month

The conference will be held at the Fort McDowell Resort and Casino February 26th – March 3rd. It begins on Tuesday the 26th with the EBE Film Festival, an all-day event which is free to the public and features various UFO and related films. Conference presentations begin the following day. Conference admission will be sold in packages for those many guests who make a week of the event, along with à la carte options available for those who just want to check it out for an afternoon. Arizona students will receive a 40% discount when they present a valid student ID at the door. The vendor room, film festival, and skywatch are free and open to the public.

The conference will feature more than 20 speakers and wide variety of exhibitors from around the globe, and covers a large variety of topics related to the UFO phenomenon including sightings, technology, government cover-ups, exopolitics, black projects, crop circles, alien visitation, space, and more.

Panel presentations on Ancient Aliens, Investigating UFOs, and Ufology in the 21st Century will feature authors, researchers and TV personalities and provide the audience a chance to interact with speakers and ask the pertinent questions.

“We strived to pull together a more diverse and interactive line-up this year,” conference co-organizer Maureen Elsberry says, “with both topics and speakers that the general public as well as seasoned UFO researchers can take away something new from. We’re not asking you to believe every speaker you hear, were asking you to keep an open mind.”

One of the most exciting events this year will be the free Night Vision skywatch on Friday March 1st led by Ben Hansen, the lead investigator from the popular SyFy show Fact or Faked. Night Optics USA, a Bushnell company, will be providing some of their latest military-grade technology for the watch.

“We’re going to have literally every genre of night vision equipment you can think of…we probably plan on coming with $30-50k worth of equipment,” said Hansen. “Hopefully we’ll catch something, the last time I did this I recorded something up in Utah that was pretty crazy and I still don’t know what it was.” Night Optics USA will also have a tent in the vendor room all week at the event where people will be able to test the gear in a fun and interactive display.

The event will also feature a cocktail party with local British Invasion band, The Rave, the EBE Film Festival Awards Banquet, and a performance by local musicians the Austen Mack Quartet. 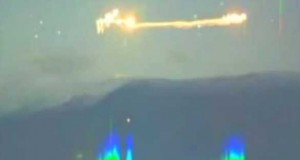 Scientists will discuss UFOs and alien contact at UFO Congress