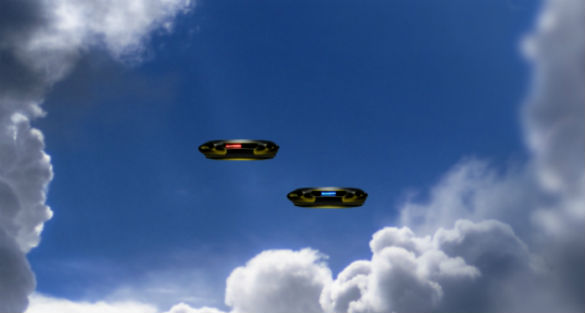 A Louisiana witness at Lafayette County reported watching two, disc-shaped objects with binoculars that disappeared into a dark cloud, according to testimony in Case 84059 from the Mutual UFO Network (MUFON) witness reporting database. 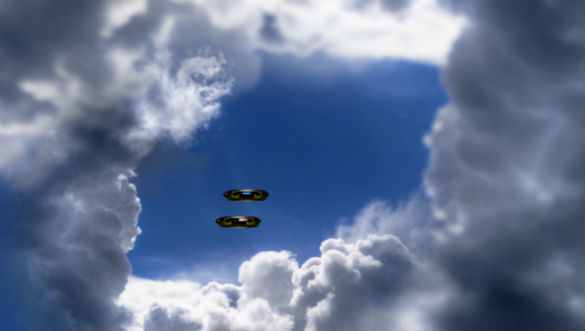 “And as soon as I got the focus, there they were – two UFOs,” the witness stated. “One on top the other and in close proximity to each other. The one underneath the other was moving left to right from side-to-side in a straight pattern, while the other one hovered above it.”

The witness had a feeling the objects were trying to communicate.

“I kind of got the feeling the bottom one was using the craft to wave at me, as to say, ‘Hey, here we are!’ As it was moving side-to-side as in someone would move their hand to wave.” 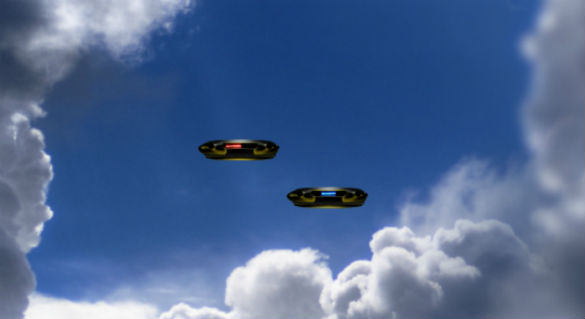 “These were both saucer-shaped and were a black or dark gray color and both had lights in the front that pulsated back and forth like the Knight Rider car, but only much slower. The color of the lights from my perspective was red on the left, blue in the middle and either yellow or white on the right. I couldn’t make out the size because I couldn’t see them with the naked eye, only through the binoculars. I was using a Redfield brand that was 10 x 50. But they were clear as day to see the shape, color and what they were doing.”

Watch the animated video the witness produced to depict the sighting.

The witness put the binoculars down to see if he could see them with his eyes, but they were too far away. 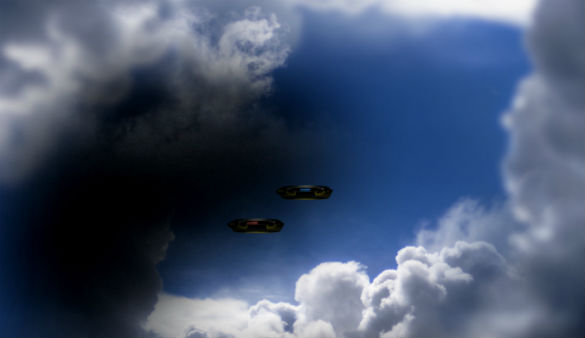 “But as soon as I looked back in the binoculars, I could see them again. I was hoping to get video footage, as I kept watching for about 30 seconds, a dark cloud was moving toward that area where they were. That’s when I told my wife to go inside and hurry to grab my phone. I was going to try and film it through the binoculars, but by the time the dark cloud got to where they were, I couldn’t see them anymore. The cloud seemed to stay there for a while, which I found strange and maybe even thought something was behind the cloud like a mother ship using a cloud cloaking device, because after it finally cleared up in that area, I couldn’t see the other craft again. I stayed out all that day and hooked up my phone to record through the binoculars, but didn’t see them again.”

Lafayette County is a parish in Louisiana, population 221,578. Louisiana MUFON is investigating. Please remember that most UFO sightings can be explained as something natural or man-made. The above quotes were edited for clarity. Please report UFO activity to MUFON.com.