Astrobiologists continue searching the Milky Way galaxy for worlds that may be hospitable for life. But when that life is found, what will its physical appearance be? David Aguilar will explore this question during a live webcast tonight, Thursday, December 19. 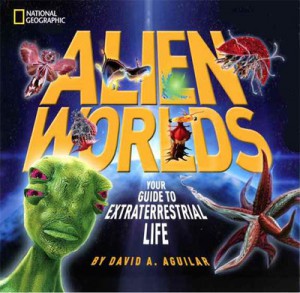 Aguilar, who is the director of science information at the Harvard-Smithsonian Center for Astrophysics (CfA), is appearing at the CfA’s monthly observatory night to discuss two of his new National Geographic children’s books: Space Encyclopedia and ALIEN WORLDS. He has developed some ideas about what extraterrestrial life might look like, and he will share these ideas with the public during tonight’s webcast.

CfA officials explain that Aguilar “applies real-world biology to known exoplanets and populates them with exotic life forms that might actually exist.”

The event takes place at the CfA complex in Cambridge, Massachusetts, and is open to the public. According to Space.com, anyone with an Internet connection can watch Aguilar’s presentation via the CfA webcast,” which can be found at http://www.cfa.harvard.edu/publicevents