The Michigan UFO Flap of 1994 occurred in southeastern Ottawa County, near Holland, and involved as many as 300 witnesses.

Mutual UFO Network (MUFON) Michigan Chief Investigator Daniel Snow worked Case 62470 which required reviewing the 1994 flap after one individual came forward reporting that they had premonitions about the events a year before they happened.

One good source for a summation of the events is UFOcasebook.com.

Snow provided an overview of the events from 1994 and audio (listen above) of the 911 calls received, and conversations between a 911 operator and the National Weather Service.

“Three hundred witnesses,” Snow recorded in his report, “observed what looked like a string of Christmas lights. The many sightings prompted the Ottawa County dispatch office to contact the Muskegon weather radar operator.”

Snow then attached the ensuing conversation about radar confirmation of about 15 minutes. 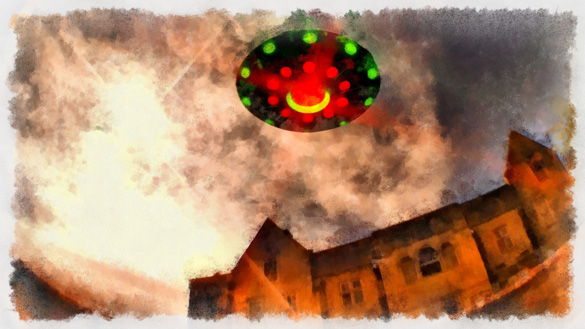 Hundreds of people in Michigan reported UFOs in the skies of Michigan in early March 1994. (Credit: Illustration by Raphael Terra)

“The key points from the conversation are: predominately three large objects moving in unison from Holland, Michigan, southwesterly toward Chicago, object signatures much larger than typical aircraft, not typical precipitation signature and at higher altitudes, 5,000 to 12,000 feet, in a triangular formation of 50 km on a side, disappearing from some sweeps and reappearing on subsequent sweeps, gradually moving to southwest to Chicago.”

Snow went on to rule out ball lightning, Chinese lanterns, and aircraft lighting, and filed the larger case as an Unknown.

“No natural phenomenon or man-made objects are a close fit as a stimulus for these events and the event stimulus remains unknown.  The attached police dispatch to weather radar operator audio is an excellent credibility additive for this flap.”