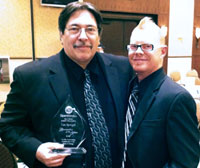 Speigel has actively researched and reported on the UFO phenomenon for decades as a journalist and media personality for major networks including NBC, ABC, AOL, and currently with the Huffington Post. He is also responsible for bringing the UFO topic to a world stage in 1978 when he produced a presentation on UFOs at the United Nations.

The UFO stories written by Speigel for the Huffington Post were very popular in 2011, and many even received front page placement. His quality reporting, his continued search for the truth, and his willingness to cover UFO stories in the mainstream media is why Open Minds proudly named Lee Speigel Researcher of the Year.