A mini-drone quadrocopter, powered by a laser beam, has set the endurance record for laser-powered hovering 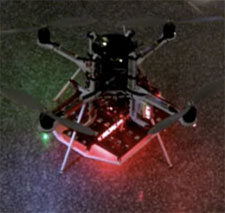 A mini-drone quadrocopter, powered by a laser beam, has set the endurance record for laser-powered hovering – a flight lasting more than twelve hours.

The Pelican quadrocopter was built by Ascending Technologies, a German company specializing in flying robots. The laser beam used to power the Pelican was developed by LaserMotive, a company that won $900,000 last year in a project backed by NASA called the Beam Power Challenge. This diode-laser beam system uses near-infrared light from the equivalent of 250,000 laser pointers to serve as a “wireless extension cord,” as the president of LaserMotive describes it.

The Pelican is a prototype for a new generation of military mini-drones, and is sure to generate UFO reports because of its mysterious appearance in the sky.