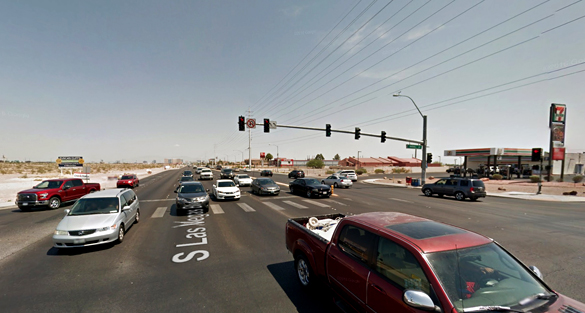 A Nevada witness at Las Vegas reported watching a white, triangle-shaped object in the afternoon sky, according to testimony in Case 78272 from the Mutual UFO Network (MUFON) witness reporting database.

The witness was driving southbound along Las Vegas Boulevard near the Blue Diamond intersection about 3:45 p.m. on August 3, 2016, when the incident occurred. 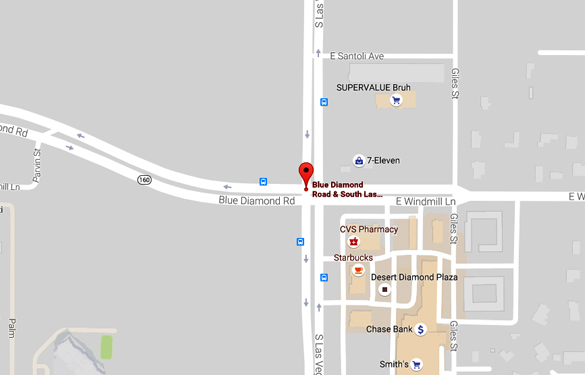 The object stopped in mid-air while the witness watched on August 3, 2016, near the intersection of Las Vegas Boulevard and Blue Diamond, pictured. (Credit: Google)

“Had just left a work meeting,” the witness stated.“There were clouds all over the valley that afternoon, some of them really big puffy clouds, some grayer clouds, some thinner clouds, but also lots of sun.”

“I noticed a lightning bolt which I don’t see very often in Vegas directly south several miles. That drew my attention to a white object moving toward the north and to my left – basically over Henderson and 10 degrees to the southeast from my southerly direction.” 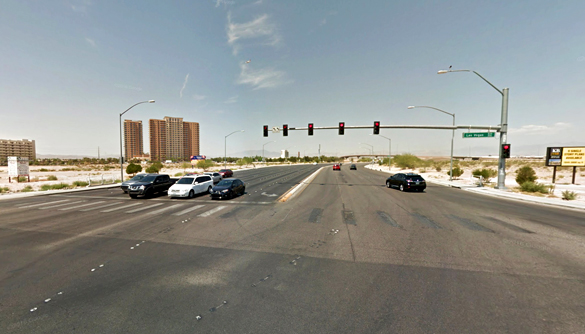 The object appeared to be triangular or crescent in shape. Pictured: Las Vegas Boulevard at Blue Diamond intersection. (Credit: Google)

“It was moving through the clouds. It then stopped in mid-airmaybe a couple of miles up, as a complete guess. I thought that seemed strange. It was smaller than an airplane. My first thought was maybe it’s a helicopter. But it was solid looking, no rotor and all white. The white didn’t appear to be from any lights or from sun reflection as best I could tell. It was somewhat triangular-shaped, but really it was more crescent-shaped that, instead of being rounded off, came to a point at its head.”

“Next thought – it must be a drone. Then the object started flying from its midair stop to next moving from my left to my right and moving directly west. At this point, I was still thinking it’s a drone. It was sort of moving erratically, but not particularly fast. It stopped near one of the large puffy clouds for a moment and now positioned off to my right. Maybe over the Southern Highlands area 10 degrees to the southwest from my southerly direction. I was at this point parked near my home.”

“Then suddenly, the object slowly moved directly into that big cloud. I waited around outside for several minutes to see if I could spot it again, but was unable to and it was a tad bit hot out! But it was an unusual looking object that stopped in midair, flew a somewhat erratic pattern, and then seemed to intentionally go directly into a cloud. The whole sequence maybe lasted 10 minutes.” 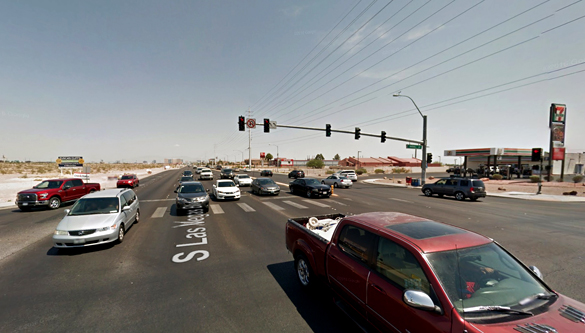 Nevada MUFON is investigating. Please remember that most UFO sightings can be explained as something natural or man-made. The above quotes were edited for clarity. Please report UFO activity to MUFON.com.