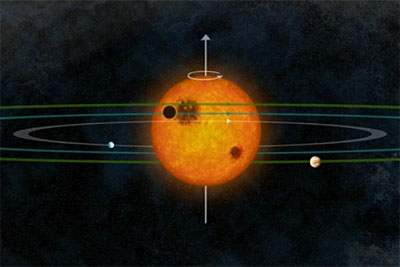 A team of researchers set out to find solar systems shaped like ours, and by using data from NASA’s planet-hunting Kepler space telescope, they succeeded.

The Christian Science Monitor explains that the three planets in the Kepler-30 star system “all orbit in the same plane, lined up with the rotation of the star — just like the planets in our own solar system do.” These three planets — Kepler-30b, Kepler-30c, and Kepler-30d — are not only larger than Earth, but two are even more massive than our largest planet Jupiter!

Roberto Sanchis-Ojeda is a Ph.D. candidate at MIT and the lead author of the research team’s new study published in the journal Nature. He explains, “The physical conditions of the new system are such that it looks pretty much like our system.” Popular Mechanics points out that the previous assumption had been that few star systems look like ours. But based on Kepler’s new information, many more systems like our own could be out there.