Astrobiologists are excited about the possibility of extraterrestrial life on Jupiter’s moon Europa. Evidence suggests this icy moon is home to a vast subsurface ocean. But until tools land on the moon to drill through the ice, ice-penetrating radar is the best method researchers have to confirm the existence of an ocean below the moon’s surface. Unfortunately, Jupiter’s own radio waves interfere with this process. But researchers believe they can use these radio waves to their advantage. 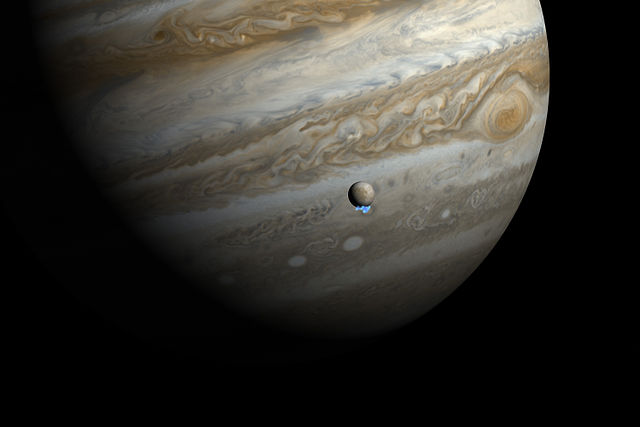 Phys.org explains that Jupiter’s radio waves come from clouds of electrically charged particles trapped in the planet’s magnetic field. In order to cut through the interference from Jupiter’s loud radio signals, “a mission probing Jupiter’s moons would need a relatively strong transmitter, a massive device that might be difficult to power and fit aboard the limited confines of a spacecraft.”

But rather than putting a transmitter on a spacecraft to fight against Jupiter’s radio signals, a new study suggests harnessing these radio waves to scan the planet’s moons, including Europa. The study’s lead author, Andrew Romero-Wolf at NASA’s Jet Propulsion Laboratory, explains, “The technique we are developing could not only provide a solution to that problem, it could turn it into a strength.” He continues,

The great strength of this technique is that it doesn’t need a transmitter, just a receiver . . . A scanning system for subsurface oceans in icy moons potentially already exists. All we have to do is go there and listen.

As Phys.org describes, this process, known as interferometric reflectometry, would work by positioning a spacecraft between Jupiter and one of its icy moons, which would monitor decametric emissions from Jupiter and echoes of signals reflected off the moon. This process would enable researchers to determine the thickness of the moon’s ice shell and its ocean’s depth. 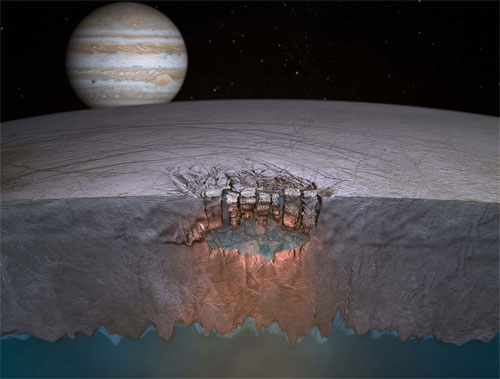 Experts believe Europa has two-to-three times the volume of all the liquid water on Earth, so Europa’s ocean is likely to have a wide variety of ecosystems. And a recent study suggests that the building blocks for life are common on this icy moon.

Romero-Wolf is excited about the information that can be acquired by utilizing interferometric reflectometry. But he cautions, “”Unambiguous observation of a subsurface ocean or liquids in the ice of Europa is only the first step towards identifying the possibility for life . . . What we are proposing will not be able to tell us whether there are living organisms in Europa, but it could provide strong evidence for that possibility.”

This new study will be published in the journal Icarus.