We hope you enjoy this video as we commemorate an important time in American history, and two important men... 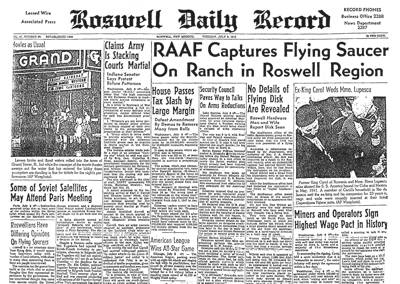 63 years ago today the Roswell Daily Record ran a front page story regarding the recovery of a Flying Saucer by the Army that had been taken to the Roswell Army Air Field. Intelligence officer Jesse Marcel was the first military man to get a look at the material, and one of many at the Air Field to believe that the debris was not of this world. His testimony to researchers in 1978 sparked the public’s fascination with Roswell, and without it we may have never known about this extraordinary event.

Open Minds sponsored the Roswell city anniversary celebrations, and had the honor of spending time with Marcel’s son, Jesse Marcel Jr. He gave us a tour of the city, pointing out the important landmarks while reminiscing about the debris his father had shown him, and what he knew about the incident from what his father and Roswell researchers had told him.

We hope you enjoy this video as we commemorate an important time in American history, and two important men, Jesse Marcel and his son Jesse Jr.