Irene Granchi, one of the great pioneers of Brazilian ufology, passed away in Rio de Janeiro at the age of 97. 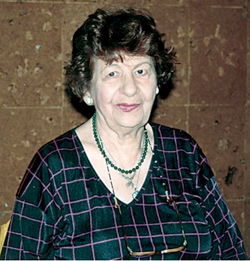 Irene Granchi, one of the great pioneers of Brazilian ufology, passed away in Rio de Janeiro at the age of 97. Although she had effectively retired for many years due to advanced diabetes and other health complications, Brazilian ufologists are in deep mourning over her death. The country’s most influential researcher and publisher of Revista UFO, A. J. Gevaerd, posted a long obituary in their ufo.com.br website titled, “We lose our matriarch.” The article begins with a quote from Granchi that shows her practical philosophy of what is required to solve the UFO enigma: “Ufology is done collectively. No one alone will understand what these visitors want. There must be an exchange, a sharing and discussion of the results of our work.”

I am fortunate to have known Irene Granchi quite well and I can certainly attest that she lived by these principles of sharing the data. I met her back in December of 1983 at an International UFO Symposium in Santa Fe, Argentina, and she invited me to talk at a conference in Rio in April 1984 organized by CISNE (Portuguese acronym for Center for the Investigation of the Nature of Extraterrestrials), a UFO research group she created in 1982. My older brother, who was married to a Brazilian, lived in Rio and so I spent a whole month at his apartment and had plenty of opportunities of visiting Irene at her apartment in the Rio neighborhood of Botafogo. She was extremely generous with her time, opening her files and introducing me to the cream of Rio’s ufologists. Among others, I met João Martins, the legendary journalist with O’Cruzeiro magazine who had reported all the classic stories in the fifties; Fernando Cleto Nunes Pereira, a gentleman who had close ties with the Brazilian Air Force UFO investigation project led by Brigadier General João Adil Oliveira also in the fifties; and José Victor Soares, another pioneer of Brazilian ufology who was born in the Azores Islands in 1931 but lived in Porto Alegre, a city in sourthern Brazil. Soares was a speaker at the same CISNE event and sadly passed away on December 10, just two days before Irene.

I just found my notebook from that April 1984 Brazilian trip, which contains a wealth of information about Brazilian cases and researchers, none of which would have been possible without Irene Granchi’s generosity and contacts. But let’s see first some basic facts about her life and work.

Irene Granchi had an interesting international background and knowledge of languages which became very useful later in her UFO investigations and contacts with foreign ufologists. She was born in Germany on November 26, 1913, although she was a British subject. She lived in various parts of Europe and the Middle East in her youth, including Cairo and Milano, where she studied and met her husband, the Italian musicologist Marco Granchi. They came to Brazil probably in the late 1930s, since she became a Brazilian citizen during the long era of General Getulio Vargas, who ruled the country between 1930 and 1945 as a dictator and between 1951 and 1954 as an elected president. It was right at the beginning of the modern UFO era in 1947 that Irene had her first UFO sighting, the catalyst for what later became a full-time effort. She described this sighting in a lengthy interview given to Brazilian researchers Claudio Tsuyoshi Suenaga and Pablo Villarrubia Mauso many years ago, which is posted (in Portuguese) in the ufo.com.br website. The researchers asked what was the genesis of her interest in UFOs and Granchi responded:

“It was when I saw a flying disc for the first time, in July of 1947. In that time my family was living in a place in Vassouras, in the interior of Rio de Janeiro [state]. It was more or less 15 h 30 when I went to the orchard to get some lettuce for dinner when I saw an object appearing on the horizon, at about the height of an eucalyptus tree. It had an impressive brightness, was metallic and looked circular like the lid of a cooking pan. I was a housewife at the time, that’s why the comparison. Since people back then were not talking about flying saucers and I was quite rational, even Cartesian [from the French philosopher of rationalism René Descartes], I started to enquire what could be this strange object that moved slowly in an oscillating manner over the local railroad station. Suddenly some weird ideas appeared in my head, which at that time I didn’t know what they were but now I know were telepathic messages. The first one was: ‘This is a manufactured object.’ The second: ‘But it was not manufactured here on Earth.’ And the third: ‘You will not have peace until you devote your body and soul to the study of these objects.’ Several thoughts came to my head in that moment, but what remains is that I would never be able to rest so long as I didn’t do my best to understand what I had just seen. And from there to now, five decades later, I am still trying.” 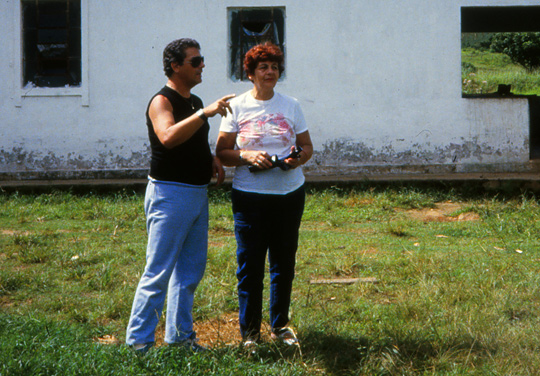 Irene was fortunate that one of her mentors was the late Dr. Olavo Fontes (1924-1968), the famous Rio gastroenterologist who is considered the father of Brazilian ufology. Fontes was the foreign representative for the Aerial Phenomena Research Organization (APRO), the pioneering UFO group run by Coral and Jim Lorenzen in Tucson, Arizona, and investigated all the classic Brazilian cases from the fifties and sixties such as the attack on Fort Itaipu and the sexual abduction of Antonio Villas Boas in 1957, and the famous Trindade Island photographs taken from a Brazilian Navy ship in 1958. Irene’s thorough knowledge of English came handy as she translated all of Fontes’ reports to APRO and various English UFO materials into Portuguese. After Dr. Fontes passed away in 1968 she became the APRO representative in Brazil and later she represented Dr. J. Allen Hynek’s Center for UFO Studies (CUFOS) as well. She corresponded and exchanged cases with researchers from all over the world. During a second trip to Rio de Janeiro in 1986, where I lectured at another CISNE event, I remember meeting for the first time at her apartment in Botafogo the famous African ufologist Cynthia Hind from Zimbabwe. Another frequent correspondent of hers was my old mentor from New York, the late Hungarian-American Col. (Ret.) Colman von Keviczky of ICUFON, who lectured at the IV International Congress of Ufology in Rio in September 1986.

On August 17, 1968, at about 9:15 pm, Irene and her whole family had a second UFO sighting as they waited for a bus in the Rio neighborhood of Leblon. By 1978 she had amassed sufficient UFO materials and contacts to launch a professional magazine, OVNI Documento, published by Hunos Editorial in Rio. It contained collaborations from all major Brazilian ufologists, including General (Ret.) Moacyr Uchoa, Nunes Pereira, Flávio Pereira, etc., as well as important foreign consultants like Dr. Hynek, Bill Chalker from Australia and the late American reporter Bob Pratt, who visited Brazil frequently. OVNI Documento lasted only a couple of years but it was the direct predecessor of today’s Revista UFO. 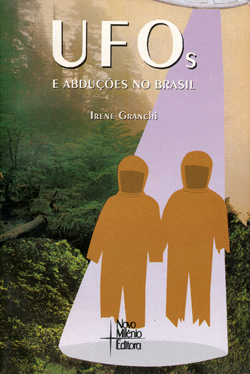 “Tireless and feisty, Irene conducted countless investigations (among them the abduction of the truck driver Elias Seixas) and participated as a lecturer in dozens of events, symposia and congresses,” wrote Gevaerd in his obituary. She would go to remote fazendas (farms) carrying the bulky tape recorders used back then, cameras and other equipment to document UFO sightings, close encounters and abductions. In time she probably became Brazil’s number one expert on alien abductions, publishing in 1992 her book UFOs e abduções no Brasil, which was released in English in 1995 as UFOs and Abductions in Brazil (Horus House Press). In this book she finally laid out her extensive files on abductions, including the case of the truck driver Elias Seixas in 1980 (whom I met at her apartment in one of my trips to Rio); the missing time of the pianist Luli Oswald in 1979, who was a close friend of Irene; the teleportation incident of Onislon Pattero in 1973; the case of an army general and doctor in 1972 identified only by his initials Dr. H. B.; and many more.

In my notebook of that April 1984 trip to Brazil, where I spend countless hours with Irene at her apartment and visiting other researchers, I wrote down numerous interesting anecdotes. We even went on a field trip to the interior of Rio state accompanied by Wanderlay Penna, a Brazilian Army Captain in Reserve, attorney and ufologist. We visited Casimiro de Abreu, known as the Brazilian UFO Woodstock because some sixty thousand people gathered there in 1979 in expectation of an official UFO landing that had been announced by a UFO contactee. Needless to say, nothing happened and the police took the man away for his own protection. We also spend the night at a fazenda (farm) in Macaé, where the farm owner, Don Silvio, had built a UFO landing pad with blinking lights. Some thirty people gathered to meditate and call for the aliens—sort of a Brazilian version of Dr. Greer’s C-SETI with the added elements of local folklore like lighting candles for the Orixas, the nature spirits of the Candomblé Afro-Brazilian religion. There was no UFO landing but it was a fascinating experience.

Many more anecdotes are written down in that 1984 notebook, but I want to end with a particularly interesting one concerning the visit of Dr. Hynek to Brazil in 1975. Irene knew all the ins and outs of this visit because she was Hynek’s interpreter throughout his trip. I wrote in my notebook in Spanish that, “by the influence of [Gen. Moacyr] Uchoa, Hynek talked to a full session of the Congress in Brasilia (Irene was the interpreter) and also met with Figueiredo, who was then chief of SNI (National Intelligence Service).” Gen. João Figueiredo later became the last military president of Brazil between 1979 and 1985 before the country returned to a full civilian democracy. According to the notes of my interview with Irene, “Hynek wanted to achieve a big official score with the Brazilian government” and obtain all their official UFO files (the same ones that are now being released officially by the air force). “However, a journalist accused him of attempting to take all the official records for CUFOS and that Brazil, as a sovereign nation, could not accept this. Hynek had to return to the USA quite frustrated.”

I could go on telling interesting anecdotes and fascinating cases documented by Irene Granchi. Her energy and generosity were limitless and she will be missed and remembered for a long time by all those who knew her. Rest in peace, old friend.

Those who can read Portuguese can check A. J. Gevaerd’s long obituary and tribute to Irene Granchi here and read the lengthy interview conducted by Tsuyoshi and Villarrubia here.