Increased activity reported by MUFON in 2012, but not just UFO sightings

It was just last week that Lee Speigel of the Huffington Post reported that the Mutual UFO Network (MUFON) had already noticed an increase in UFO sighting reports in the first week of January compared to last year. And there was more activity reported by MUFON this week, but not related to UFO sightings. 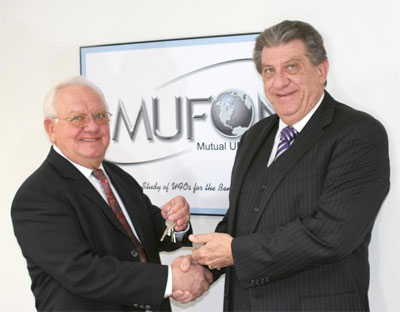 On Tuesday, January 17, the Greeley Tribune reported that MUFON’s International Director Clifford Clift will be stepping down from his post. Clift, who has occupied the position since March 2010, is resigning because he wants to spend more time with his family. David MacDonald, a MUFON board member who has served the organization as Assistant Director of Investigations, Star Team Administrator, and State Director of Kentucky, will be replacing Clift as International Director on February 1. Clift will reportedly remain active with the organization as he oversees the archives.

But the organization’s structure change isn’t the only major activity recently reported by MUFON.

MUFON Headquarters, currently based in Greeley, Colorado, will be relocating to Ohio. Roger Marsh of Examiner.com explains:

Clift is asking everyone to have patience during this transition period. He recently stated, “Keep your eyes on the sky and let’s all welcome Mr. David MacDonald as MUFON’s new International Director.”

Clifford Clift will be speaking at the International UFO Congress on Wednesday, February 22 in Fountain Hills, Arizona.