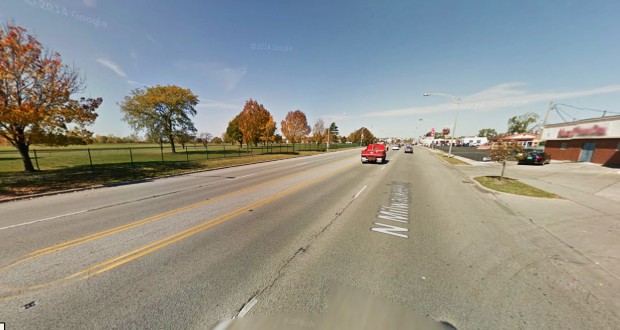 “My eye was caught by two pulsing, round red lights in the southwest sky, one on top of the other, which appeared to be a cell or water tower in the vicinity of Maryhill Cemetery,” the witness stated. “This caused me to do a complete double-take, because I know there are no such structures in that area.”

One of the objects began moving slowly from west to east.

“The other followed in a ‘wing-man’-type formation slightly behind and further south than the object to the forefront. I thought, because of their basketball-like appearance and large size, that they were helicopters of the ‘bubble-cockpit’ variety, flying low on the southern horizon.”

The objects were described as basketball-sized spheres, approximately five-times the size of the strobe lights on an airplane, with a shimmery white halo completely circling the sphere. Pictured: The 8700 block of North Milwaukee Avenue, Niles, Illinois. (Credit: Google)

The witness parked his squad car, shut off the lights and engine, and got out.

“As soon as I got out of my car, I realized that these were not helicopters, and were much farther away and larger than I originally thought. There was no helicopter sound whatsoever in the relatively quiet night air, and the presence of many airplanes in the sky (Niles and Park Ridge are under major flight paths in and out of O’Hare) provided me with an excellent contrasting point of reference to what the UFOs at least ‘were not.’”

“They were basketball-sized spheres, approximately five-times the size of the strobe lights on an airplane, with a shimmery white halo completely circling the sphere. The red light was unlike anything I have ever seen, having a pulsating, almost ‘liquid’ or ‘living’ appearance, and glowing, rather than piercing the night sky. The white light appeared like an aura (similar to the heat you see emanating from a rocket or jet engine). I was awestruck.”

“When the first craft was almost directly in front of my line of sight, the spheres both suddenly ‘receded’ quickly up and into the western sky (back where I first saw them, but much higher). The UFO that was offset to the rear disappeared so quickly that I barely had time to register that it was gone. The craft that was more ‘in the lead’ receded up and back to the point that it looked like a red star, and then blinked out of sight.”

The officer said that there were two witnesses to the event.

“I saw that there were two adult male citizens, one African-American and one Caucasian, looking up at the sky from a residential driveway across the street and south of my location. I approached them and we all verbally confirmed that what we had seen had not been fireworks or flares of any kind, but were definitely very large, unidentifiable aircraft. We were all very excited. I remember that my emotions were in a ‘condition red’ or ‘high alert’ status – I remained in this psychological state for many hours after the sighting. The African-American citizen kept repeating ‘warp speed! They took off into space at warp speed!’”

The witness mentioned that other electronic anomalies were happening during the event.

“Two things I would like to point out are that – one – for the 20 minutes or so prior to this sighting, I was unable to connect to the Internet on both my Blackberry cell phone or my in-car Panasonic Tough Book Laptop with Verizon air card. Five minutes after the spheres ascended out of sight, both my telephone and in-car computer came back online. And two – I did not think to take photos of the craft because the camera on my Blackberry produces very poor quality photos. I’ve tried to take pictures of the full moon in the past, and they come out as a blurry white pin-dot of light. I am working on getting a record of any 911 calls for suspicious lights in the sky during this time period.” 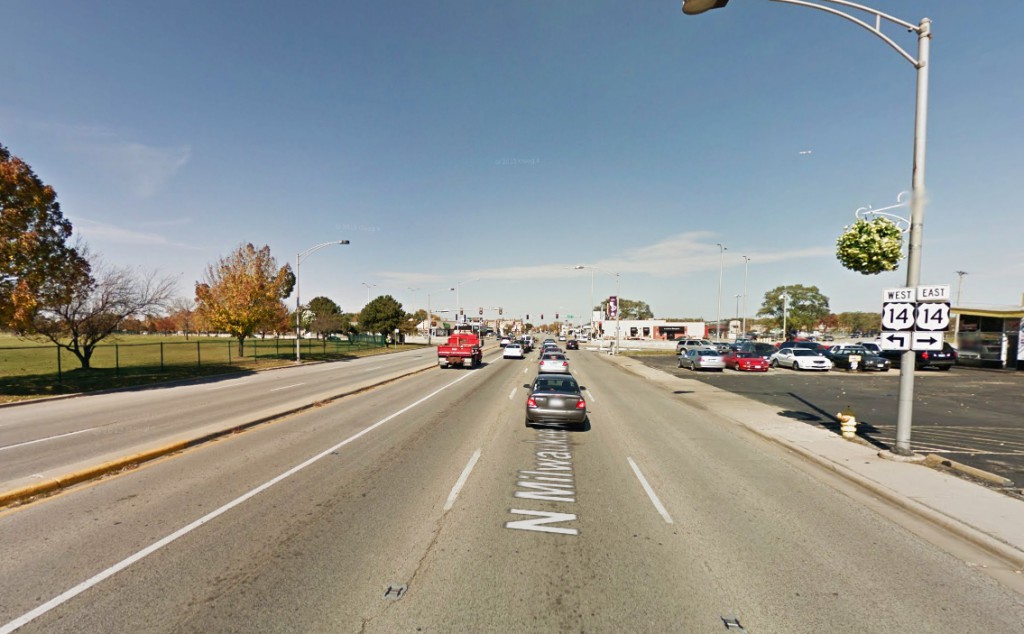 The officer said that starting 20 minutes prior to the UFO event, he was unable to get into the Internet. Pictured: The 8700 block of North Milwaukee Avenue, Niles, Illinois. (Credit: Google)

Niles is a village in Cook County, Illinois, population 29,803. MUFON Illinois is investigating. Illinois has a current UFO Alert Rating of 4 with a higher than average number of recent reports nationally. Illinois had 22 UFO reports in July 2014 – the 12th highest reporting state – while California had 104 reports as the highest reporting state. The above quotes were edited for clarity. Please report UFO activity to MUFON.com.