An Idaho witness at Boise reported watching and videotaping a red light in the sky that emitted a flashing orb that moved to ground level, according to testimony in Case 52934 from the Mutual UFO Network (MUFON) witness reporting database. 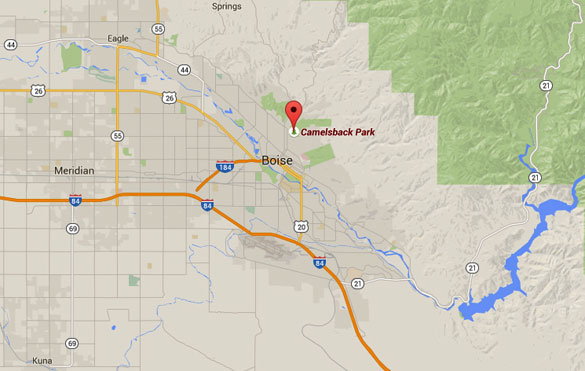 The investigator pinpointed the object to be over the Cambelsback Reserve area near Boise, ID. (Credit: Google Maps)

The incident occurred on December 24, 2013, and was reported to MUFON the following day. MUFON STAR Team Investigator Charles Stansburge investigated and closed this case as an Unknown.

The witness was driving home with his wife when they first saw a red light in the sky.

“It caught my eye because I am always looking up for strange lights,” the witness stated.“I asked my wife what she thought and she recommended that we pull over – so I did.”

The witness looked at the object while stopped and realized it was not moving.

“I told my wife that we should hurry home and grab the video camera and hopefully it would still be there. Got home, ran inside, grabbed my camera and got it into view just in time to see it drop another orb, but this one was flashing.”

“It was moving down slowly and then stopped and almost seemed to come back up. Then the flashing object went back down and stopped for a second and then shot down to the ground. I didn’t realize the speed of the object’s decent until watching the video back in slow motion. It was like a bullet and didn’t make a sound. After the second object was out of view I zoomed in on the initial object and it flickered and blinked out.” 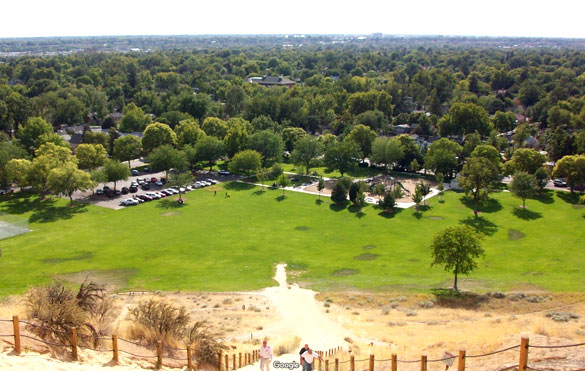 An object appeared to be emitted from the UFO that dropped to ground level at the Camelsback Reserve area, pictured. (Credit: Google)

Stansburge stated in his report that this is one of three cases with witnesses that had seen the same object at the same time and day. Based on the witness locations, he tracked the object’s location at the Camelsback Reserve area. The other cases were Case 52942 and Case 52930.

“I contacted the Mountain Home Air Force Base,” Stansburge stated,“and they claim there were no flights or exercises done that night – no aircraft were out at all. I also called the Boise Gowen Air National Guard and they had no exercise or any aircraft out at all. No calls were made to the police department or sheriff’s office as well.”