A web comic titled Trying Human is a fictional drama about an alien abductee. The comic’s creator, Emy Bitner, started Trying Human on the Internet in 2008, but she is now taking the comic from the web to print.

Bitner launched a Kickstarter campaign on January 17 to help fund the process of turning Trying Human into a graphic novel. The Kickstarter description explains: 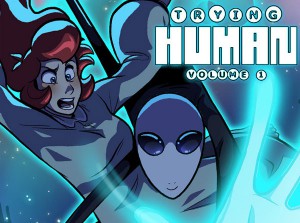 Trying Human is a full color graphic novel that follows New York City secretary, Rose, as she learns she’s being abducted by a group of aliens, the Greys, a race without emotions or sentiment. She catches the interest of Hue, an empathetic Grey, and his funny friend, Quazky, a Reptoid alien from a neighboring mothership. Using a device, the trying human circuit, the two friends infiltrate Rose’s life and the human world.

A second storyline that begins every chapter, encompasses the lives of Phillis, Walter, and Dr. Glasner, all of whom are stationed at the Nellis Testing Range in 1947. Followed by a menagerie of aliens, the mysterious MAJESTIC12, and one defunct German scientist, the two girls try to figure it all out with over half a century between them.

The first four chapters which comprise the first volume focus mostly on Rose’s abductions, her boyfriend Roger’s new job for a secret branch of the government, and Phillis’ initial encounters with EBE1, an alien under her care.

Bitner explains that modern ufology influences the comic, “with much of the focus being the interpersonal relationships between the aliens and humans.” In fact, she admits that, when she is not drawing, she is studying UFOs and alien abductions.

The crowdfunding campaign for Trying Human on Kickstarter runs through Sunday, February 16. The funding goal is $10,000. But if that goal is surpassed by $10,000, Bitner plans to also create a “full color 4 to 7 page comic about the Betty and Barney Hill alien abduction.”