A Washington witness at Spokane Valley reported watching and videotaping a glowing sphere that stopped to hover and appeared to drop something, according to testimony in Case 53762 from the Mutual UFO Network (MUFON) witness reporting database. 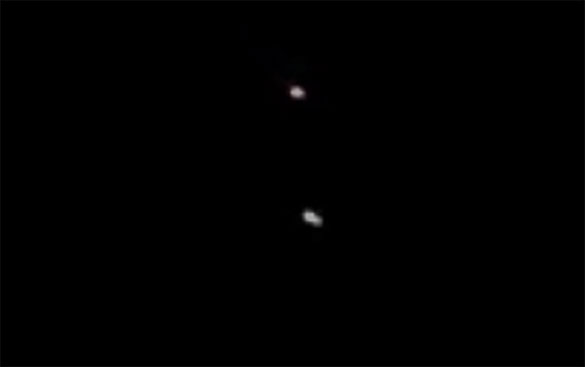 Still frame from witness video shows the object dropping out of the UFO. (Credit: MUFON)

The witness stepped outside onto a back porch about 7 p.m. on January 26, 2014, and noticed a bright object that was yellow, red and orange.

“It traveled towards our house northbound, stopped, and changed direction to the east,” the witness stated. “I had called my family to witness the object.”

“The object stopped, flashed very brightly several times and then discarded something. There was glowing discharge from the bottom of the object. Object lost brightness intensity and then slowly went away.”

This is not the first time the witness has seen this object.

“This was the second time I have seen the same object do the exact same thing in nearly the same place. The first sighting was slightly farther southeast and farther away. This time it was close.”

MUFON Washington State Director James E. Clarkson investigated this case and closed it as an Unknown.

“The reporting witness stated that he walked out to his patio and he observed a brightly glowing object that appeared to be flying from the south in the direction of his residence in Spokane Valley,” Clarkson wrote in his report.“Fairchild Air Force Base is about 16 miles northwest of Spokane.” 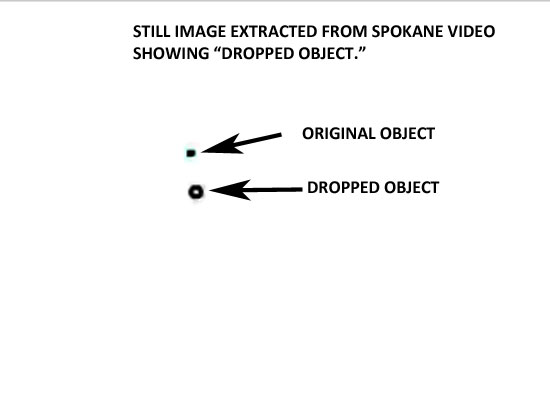 Clarkson reviewed the witnesses’ description of what happened.

“A glowing orange-red light moved from the south and then hovered. As the light slows down and becomes slightly larger, it begins to pulse, and the light appears to swell and then recede in diameter. The object splits and the brighter and larger part of it falls away and then disappears. The smaller part continues to move away to the east and it disappears.

“There is no known natural phenomena that would produce what is visible. Further, there were radar anomalies present in the area that may correspond to what was taken on the video recording. The argument can be made for an unknown type aerial military craft, but the weather and location do not seem appropriate for a military exercise.

“The primary witness lives with his wife and her parents at a home in Spokane Valley. They have had two sightings of a similar light in the preceding month, and because of the prior events, they decided to keep a video camera ready.

“I received extensive assistance from William Puckett, who retired from NOAA and has expertise in weather and radar. His Final Report on evaluation of the radar data and includes anomalous radar returns that appear somewhat consistent with the location of the witnesses and the images on the video.

“There appears to be a discrepancy between the radar image timing and the timing of the video according to the witness. The time and date feature was apparently not activated. The witness originally reported that the incident was at approximately 7 p.m. However, upon closer questioning, no one looked at a clock. The determination was made based upon the habits of the household. They serve dinner around 7 p.m. The UFO sighting occurred at about the time that they were starting to prepare dinner. Also, the witnesses had lively discussion about what they had just seen afterwards. This would push the videotaping back closer to the time of radar anomalies. 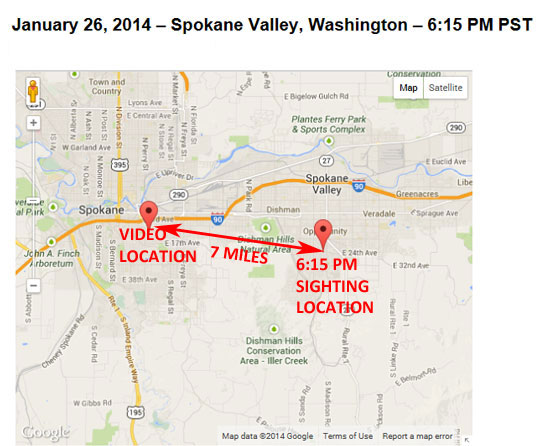 Location of the witness and the object. (Credit: MUFON)

“Finally, I went over the size of the unknown at its maximum when it appeared to be closest to the witnesses. The primary witness stated that the smallest object that would have covered the UFO was a dime.With this information, William Puckett made the following calculation.”

“First it appears that the cloud deck over Spokane that night was about 5,000 feet thick,” Puckett stated in the report. “The winds were from the northwest at the surface but veered to the north-northeast up to 5,000 feet and were light (no more than 10 mph).

“Finally, a second witness made a report of a large glowing orange sphere seen to the east at about 1810 hours on the same date. This group of witnesses reside about a mile from the witnesses who took the videotape. They made a report to UFOSNW. I obtained the email of the second witness but received no response to my inquiry.”

“I am closing this case as a UAV. There is High Strangeness, High Witness Credibility and Technical Evidence.”