Home / Articles / Giant Rock hosted giant UFO convention
...during the 1950s, up until his death in 1978, George Van Tassel held his own humongous UFO convention. In 1959 there is alleged to have been over 10,000 attendees. 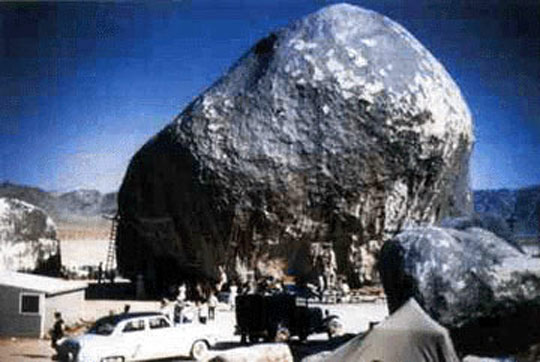 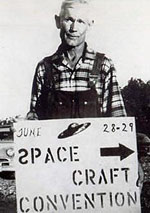 This month the Mutual UFO Network is holding their 42nd annual UFO symposium in Irvine, California, one hundred and twenty miles west of the location of the largest UFO conventions in history. Near a town called Landers, just outside the boundaries of the Twenty Palms Marine Corps Air Ground, lies one of the largest free standing rocks in the world. It was here that during the 1950s, up until his death in 1978, George Van Tassel held his own humongous UFO convention. In 1959 there is alleged to have been over 10,000 attendees.

The Giant Rock that marked the location of the event has its own mysterious past. In the 1930s, an eccentric German prospector named Frank Crtizer dug out a home for himself under the rock. The rock is over seven stories high and covers 5,800 hundred square feet of land. Plenty of room for a good sized home. Van Tassel wrote ,” The rooms dug out from beneath it amount to approximately 400 sq. ft., so one can readily see that this is a very small fraction of the total area of the bottom side.” Critzer figured it would keep him cool in the summer, and warm in the winter. There he mostly kept to himself, spending his time prospecting or listening to his radio.

According to Van Tassel, Critzer’s German nationality and his radio antennae that he placed on top of the rock for better reception, created rumors of Critzer being a German spy during World War II. Although the details of the story are unclear, Van Tassel says in 1942 deputies came to take Critzer in for questioning. Crtizer locked himself in his underground house, so the deputies threw a gas grenade in a window to get him out. Little did they know the place was full of dynamite that Critzer used for prospecting. The grenade caused the dynamite to go off, killing Critzer and injuring the deputies. 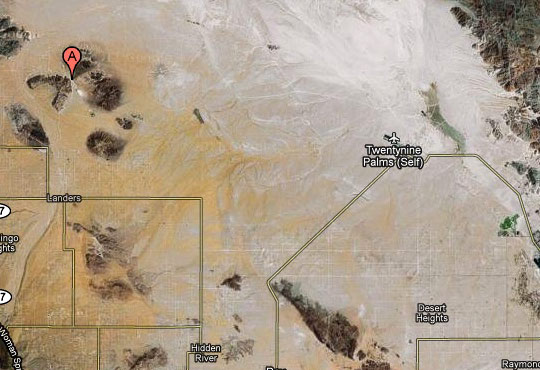 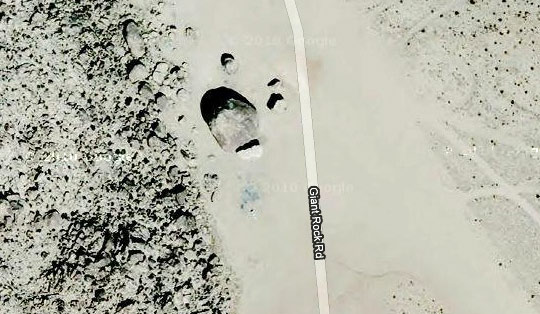 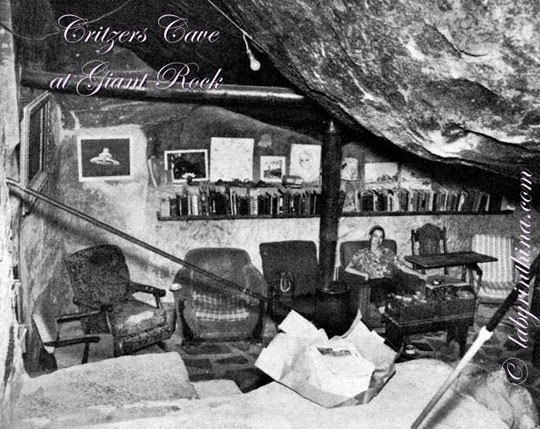 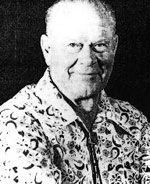 Van Tassel first met Critzer while working at his uncle’s garage in Santa Monica. He says Critzer came into his Uncle’s garage needing some help with his car, but couldn’t pay for it. Van Tassel remembers that they found Critzer to be a very interesting and intelligent person, and he and his uncle quickly grew fond of Critzer. They ended up fixing his car and sent him off with a load of canned goods and even gave him some money.

Critzer later wrote Van Tassel, inviting him to visit Giant Rock, which he did regularly. Van Tassel recalled, “Frank had a big kitchen table, and a big wood-burning cook stove, on which he prepared, cooked, and served German pancakes for anyone who happened to stop in. He usually had a case or two of dynamite and a partially opened case under the big kitchen table. We would put our feet on them when we were with him.”

Van Tassel’s visits to Giant Rock must have impressed him, because 15 years later he leased the land and built a restaurant near the rock called The Come On Inn. After leaving his uncle’s garage, prior to opening the restaurant at Giant Rock, Van Tassel worked as an engineer and test pilot for Lockheed, Douglas Aircraft, and Hughes Aviation. At Hughes, Van Tassel actually became friends with Howard Hughes himself. When Van Tassel opened his restaurant at the rock, he also built an air-strip for his pilot friends to fly into. Hughes is said to have flown in on weekends to enjoy a piece of Van Tassel’s wife’s pie. 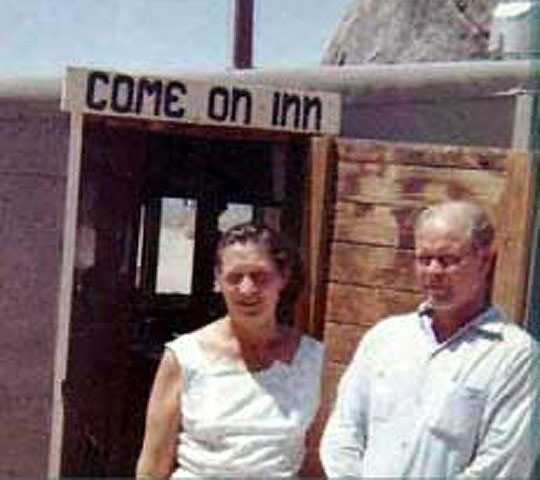 In 1953 Van Tassel began holding meditation sessions in the rooms beneath the rock. This is when he believes that he began communicating with extraterrestrials. He says in August he was awoken when a ship from Venus landed near the rock. The occupants took him aboard and revealed to him their healing technologies. Van Tassel says, “This resulted in the information which led to the principles of rejuvenation and to the creation of the Integratron.” The Integratron is what Van Tassel called the healing device the Venususians shared with him. He attempted to build it, beginning construction in the late 50s, but never quite completed it. 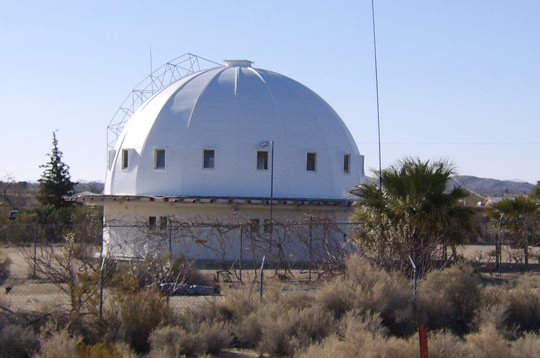 In the mid-fifties, Van Tassel also began hosting UFO conventions. Although, they were held in the middle of the hot desert, thousands of people would come to hear from UFO researchers and extraterrestrial contactees. During this period of time, there were many people who claimed to be in contact with aliens, mostly through channeling or telepathic communication. Van Tassel would provide them an opportunity to address the convention attendees atop a large wooden platform. In 1959, there were allegedly over 10,000 attendees. 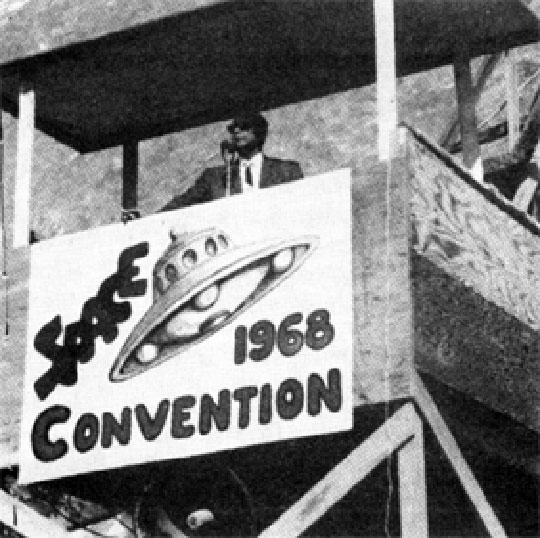 A lecturer speaks to the crowd at Giant Rock. 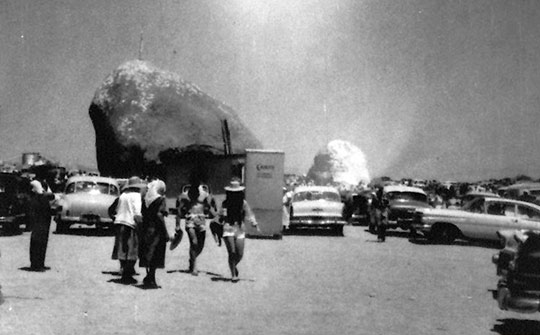 Giant Rock convention in the 1950s.

Today the largest UFO conference, the UFO Congress, garners around 2000 attendees, with any luck perhaps the MUFON symposium later this month will have this many as well. This still pales in comparison to the 10,000 people who would drive out into the desert, without the comforts of a nice hotel like modern conferences.

Visitors can still go see the rock, although it looks slightly different now. In 2000 a large chunk of the rock broke off. The Integratron is also still standing, and is often used for metaphysical functions. It is a large round dome made of wood, and is said to have incredible acoustics. The interior has a beautifully finished wood floor, and is even available for rental. 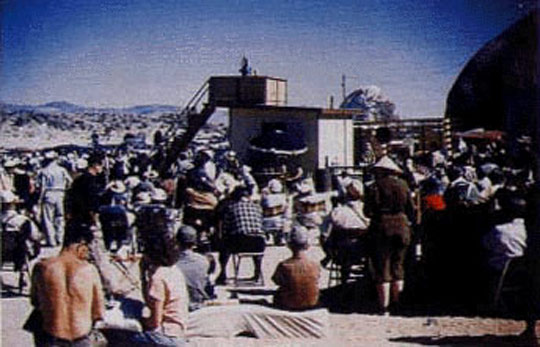 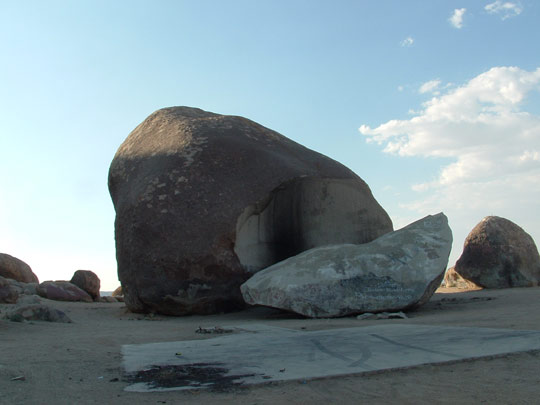 Giant Rock in 2008 with piece broken off.

Did Van Tassel speak with people from the planet Venus who shared their superior healing methods with him? Whether these conversations took place or not, the Giant Rock UFO conventions are quickly fading into obscurity, even though they are an important part of UFO and American history.

For more information about the events and George Van Tassel, you can visit the Integratron website.