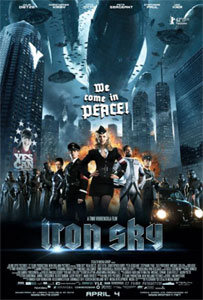 Iron Sky is a Finnish sci-fi movie that has been in the works for several years. Production began all the way back in early 2006, but it appears the filmmakers have finally completed production.

The main premise of Iron Sky is that Nazis have been on the Moon since the end of World War II, and in 2018, they launch an attack against Earth from their lunar base. The official theatrical trailer for the film was just released yesterday (February 8), which provides additional plot details. For example, a female United States president is revealed. And as the Metro explains, “The female president is a clear parody of former Vice Presidential candidate Sarah Palin, with the trademark red lipstick and glasses teamed with a stuffed grizzly bear in the White House.” The trailer also reveals that the Nazis aren’t the only ones with spaceships. The U.S. apparently has its own spaceship, named the USS George W. Bush.

Iron Sky premieres at the Berlin International Film Festival this month, and the movie is scheduled for an April 4 release.