A witness photographed four UFOs in the sky above Tom Ugly's Bridge Marina in Sydney, Australia on Monday, May 28. 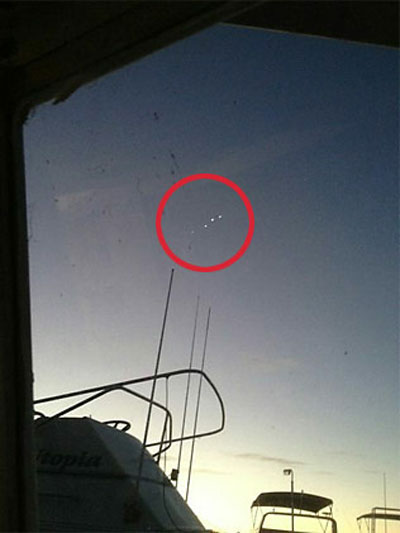 A witness photographed four UFOs in the sky above Tom Ugly’s Bridge Marina in Sydney, Australia on Monday, May 28.

The witness, Ivan Mikkelsen, was on his boat in the marina when he noticed the four bright lights in the sky. He initially saw them through his boat’s window, so he thought they might simply be reflections. But when he stepped outside, Mikkelsen still saw the lights hovering in the evening sky. The UFOs were high in the sky, and Mikkelsen thought they might be airplanes. But after watching them hover in the same place for more than ten minutes, he dismissed his airplane theory.

Five other witnesses reportedly stopped to watch the strange lights in the sky. All the witnesses saw the objects blink and disappear in an instant.

The picture taken by Mikkelsen appears to be from inside his boat, so it is not possible to corroborate his statement that the UFOs were also visible outside his boat, and therefore not a reflection in the window. But if his testimony, and of the other witnesses, is considered, then it is likely that four strange lights were, in fact, hovering over the marina.

According to the Daily Telegraph, Airservices Australia received no reports of unusual aerial objects on that Monday.

What are your thoughts? Do you believe the witness actually observed these four objects in the sky as he claims, or does his picture lead you to believe the lights were just reflections in his boat’s window? Share your thoughts with us on our Facebook page.