The first footage has been released from Ridley Scott's upcoming alien movie Prometheus.

Hollywood remains flooded with extraterrestrial-themed movies. Darkest Hour, an upcoming alien invasion flick is currently being heavily promoted on US television. And there is considerable buzz regarding the third installment of the popular Men In Black movies that will be released in May, 2012. 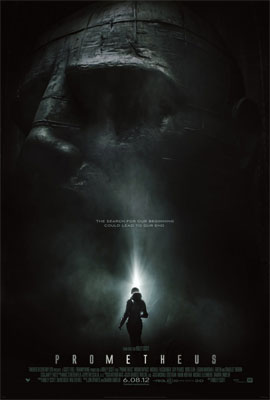 But Ridley Scott’s upcoming movie Prometheus is perhaps the most anticipated of the extraterrestrial-related films being released in the near future. Most of the film’s details have been kept under tight wraps. The film was originally planned as a prequel to the Alien movie franchise, but the screenplay was reworked into an entirely different movie, but will still somehow be related to Alien, even if only slightly.

Last month, Scott revealed that Prometheus is partially inspired by the writings of Swiss author Erich von Daniken. But key information about the movie has been hard to come by.

The website i09 provides this briefest of plot outlines:

A team of explorers discover a clue to the origins of mankind on Earth, leading them on a journey to the darkest corners of the universe. There, they must fight a terrifying battle to save the future of the human race.

And today, the first footage from the upcoming film was released. This small clip serves as a teaser trailer for the official movie trailer releasing on December 22. You read that correctly. It’s an advertisement for an advertisement. As if the buzz that has already been created about this movie wasn’t indication enough, this push to market the upcoming release of a movie trailer could be a sign of the substantial marketing push coming in the near future to promote this movie.

Prometheus is scheduled to be released in June, 2012.