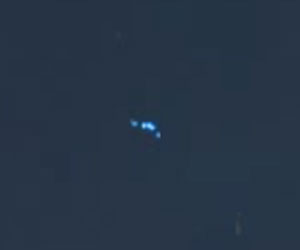 Dozens of witnesses have reported strange lights flying in a V formation above Kansas City, Missouri.

According to Fox 4 News in Kansas City, a witness recorded the mysterious lights with a cell phone on the night of Monday, October 3. But other reports indicate that the lights have been seen on multiple nights. According to Margie Kay, assistant state director for MUFON (Mutual UFO Network), witnesses saw the lights on Monday, Tuesday, and Wednesday. She explained that the reports are of “very large craft hovering in different areas, and that’s quite unusual because normal airplanes do not have that behavior. Helicopters do, but these are not described as helicopters.”

Fox 4 News states that Kay contacted local airports, looking for help identifying any of the 82 UFO sightings reported. The airports helped her determine that some of the sightings could be explained by stunt planes that were in the air at the time.

Further evidence surfaced today that supports the “stunt plane” theory. Fox 4 News reported this morning (October 7) that KC Flight, a civilian air formation team, has come forward to claim responsibility for the lights in the sky. Pilot Phillip Lamb explained that he and his eight-man team “practices at night because the city lights illuminate the planes.” He further explained that “during their flights, the planes’ wings are typically three feet apart and are stacked approximately three to four feet above or below each other, causing the planes to appear like a single object from the ground.”

If the lights that were observed by at least 82 people were the result of city lights illuminating these stunt airplanes, it would seem logical to assume that other airplanes are also illuminated at night by city lights. But other airplanes don’t seem to have caused the buzz generated by the mysterious lights in the sky this week. Additionally, several witnesses reported seeing the lights hover, then shoot off quickly. As Kay previously stated, that isn’t normal behavior for airplanes.